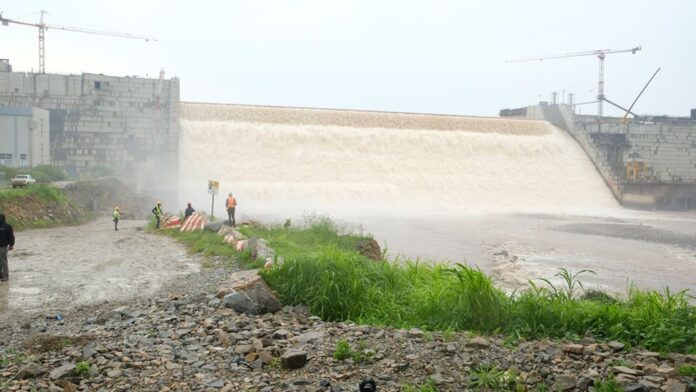 On Sunday July 19 at exactly 10:00 pm the first phase of the filling of the Grand Ethiopian Renaissance Dam (GERD) was completed. After that Prime Minister Abiy Ahmed congratulated all Ethiopians on the completion of the first phase of the filling of GERD on July 21. The country glows with proud moment where everyone walks with their heads high the following day.
Many took it to the social media to announce their excitement. “Beautiful view, It is really great, This is historic achievement, congratulations Ethiopia,” tweets by the name Idris M. Sanusi from Nigeria. “Ethiopia has the right to use Nile waters because 86% of waters originates from Ethiopia. Nile dam in Ethiopia is my dam! Its my dam! Ethiopia deserves a fair share!” wrote another by the name Belay.
Some weeks back Prime Minister Abiy had justified the start of filling the Renaissance Dam due to the heavy rainfall season. Capital also wrote the start of the filling of the GERD two weeks back saying that it started on July 8.
The idea of a massive hydroelectric project on the upper Nile River, in the Ethiopian highlands, has been a dream since the days of Ethiopian Emperor Haile Selassie in the 1960s. But it wasn’t until 2011 that the Grand Ethiopian Renaissance Dam got underway in earnest-and ever since, relations with the downstream countries Sudan and Egypt have been fraught. For Ethiopia, whose citizens bankrolled the USD4 billion+ project, the dam is not just a way to provide electricity to a power-starved corner of the continent but has become a point of national pride and emblematic of the country’s ambitions as a regional power.
The massive dam, Africa’s biggest, has become a flash point of geopolitical tensions between Egypt and Ethiopia. However During the last 12 days of the filling resident in Cairo told Capital that they have not seen any significant change on the Nile in Cairo. “I have been living here for many years, and I always cross the Nile to commute to work, and in those days I have not seen anything unusual in the Nile,” said one resident of Cairo who asked anonymity.
Ethiopia made it clear that it would continue the dam project despite lingering disagreements with other Nile-dependent countries, and in fact it began filling the massive reservoir behind the dam this month, taking advantage of Ethiopia’s rainy season. Egyptians fear Ethiopia will fill the dam over a period of just a few years, which could choke off water supplies that Egypt needs downstream, especially for agriculture. The Ethiopian government says the pace of filling shouldn’t affect Egypt’s allotment of water, and it further maintains that Egypt has used more Nile water than it’s entitled to for decades.