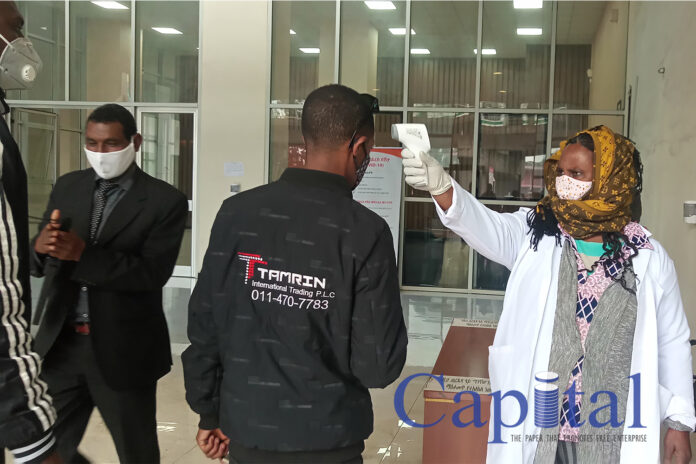 Thermometer guns has become an iconic image of the coronavirus outbreak in the world and in Ethiopia: a masked official aiming what appears to be a small white pistol at a traveler’s forehead. In our case apart from the officials at airports, security guards at every hospital, office, business center, bus station, mall and hotel will hold the gun to your head to screen people for fevers so as to prevent the spread.
The device is equipped with an infrared sensor that can quickly measure surface temperature without making any contact with a person’s skin. In recent years, it has become an important tool for countries scrambling to contain viral outbreaks. It was widely used to try to slow the spread of SARS and to curb the Ebola outbreak.
Thermometer guns are said to be unreliable outside carefully controlled health care settings, according to medical officials and experts on infrared devices.
According to Tigistu Adamu (MD), an advisor at the Ministry of Health, the devices need series calibration to be reliable. “The devices cannot be precise in certain environments or when someone has taken medication to suppress fever,” Tigistu said.
“Once the thermometers start to show inaccurate information the device need to be calibrated otherwise it will continue providing false information.”
Since the devices are distributed all over the country it is difficult for the ministry to control all, as Tigistu said.
The thermometers determine temperature by measuring the heat emanating from the surface of a person’s body. Often, however, those wielding the tools don’t hold them close enough to the subject’s forehead, generating unusually low temperature readings, or hold them too close and get a high reading.
“My temperature was often below 35 degrees Celsius when these temperature guns screen my temperature wherever I go, be it a hospital or a restaurant. This is a joke,” one person said after Capital approached him while he was arguing with security guards at a bank when they told him that the gun reads his temperature as 33 degree Celsius. Moreover Capital’s reporter tried to see readings around the city and those who use the device.
“We are told that if the gun measures above 37.5 degree Celsius we have to report that person to authorities, but no one told us what the lowest number can be. We will let inside anyone who is below 37.5 degree Celsius. We mostly get a measurement of 33 degree Celsius to 34.5 degree Celsius,” one security guard at a restaurant told Capital.
It is now common to see erroneous information of temperature guns generating unusually low temperature readings as the person is dying of hypothermia or sometimes high temperature. Typically between 36.1 and 37.2 degree Celsius is considered as the normal temperature for a human being.
Hypothermia is a medical emergency that occurs when your body loses heat faster than it can produce heat, causing a dangerously low body temperature. Normal body temperature is around 37 degree Celsius. Hypothermia occurs as your body temperature falls below 35 degree Celsius.