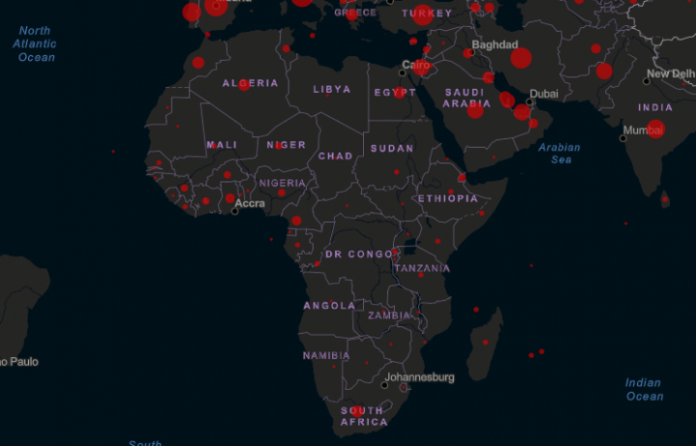 New cases increase by 50% during the last 14 days

COVID-19 infections in Africa will exceed one million cases in the coming days as the pandemic surges in several hotspot countries. In a little more than three weeks, the number of cases on the continent almost doubled to 927,661, with 19,650 deaths.
Overall, the pandemic is accelerating with the number of new cases increasing by 50% during the last 14 days compared with the previous fortnight. However, only five countries account for about 75% of the cumulative COVID-19 cases – they are Algeria, Egypt, Ghana, Nigeria and South Africa. South Africa alone accounts for around half of the continent’s total cases. Deaths are also increasing. A total of 4,376 new deaths were recorded during the last 14 days, representing a 22% increase from the previous two weeks.
Seven countries in sub-Saharan Africa which had imposed lockdowns and have now started easing them have experienced a 20% jump in cases over the past two weeks. Some countries such as the Republic of the Congo and Morocco have had to re-implement partial restrictions because of an increase in cases.
“As Africa approaches one million cases, the continent is at a pivotal point,” said Dr Matshidiso Moeti, World Health Organization (WHO) Regional Director for Africa. “The virus has spilled out of major cities and spread into distant hinterlands. Countries need to keep apace and urgently decentralize their key response services. We can still stop COVID-19 from reaching full momentum, but the time to act is now.”
One of our most important collective responsibilities is to protect front line health workers, who are at high risk. Forty-one African countries have reported nearly 14,000 health worker infections. In 16 countries which reported health worker infections over the past month, nearly a quarter recorded an increase in the past two weeks compared with the preceding fortnight.
Expanding the scale and quality of public health measures such as testing, contact tracing, isolation and care of patients remain central to the response, as well as preventing infection through handwashing, physical distancing and wearing of masks. Lifting of lockdowns that have helped to slow down the spread of COVID-19 should be evidence-based, phased and targeted.
Under-reporting of cases is a challenge as testing for COVID-19 in Africa remains low by global benchmarks, but capacity has expanded significantly. About 7.7 million tests have been performed since February. The number of tests performed per 10,000 people as of mid-July was below 100 in 43 countries out of the 54 assessed.