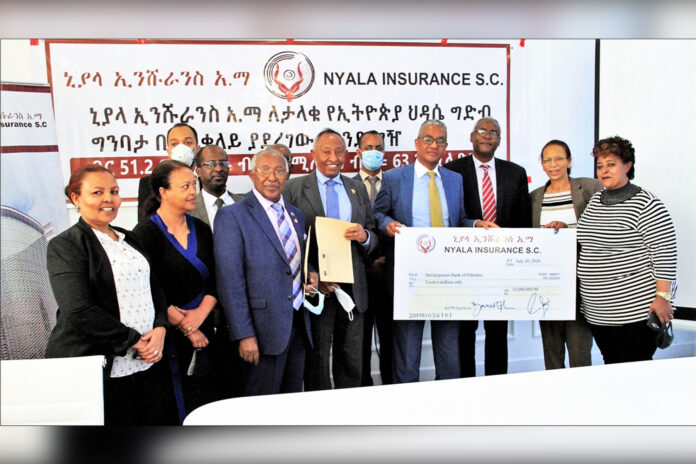 +Nyala Insurance S.C (NISCO) purchased an additional bond worth 12 million Birr to help finance the construction of the Grand Ethiopian Renaissance Dam (GERD). This comes after Ethiopia announced the completion of the first phase of filling the dam.
Chief Executive Officer Nyala, Yared Molla during the ceremony held at the Ministry of Water, Irrigation and Energy, said that the company had purchased a total of 51.2 million Birr worth of bond in six rounds since the start of the construction.
“Today’s bond is the 7th round of purchase that brings the total amount of contribution so far made by our company to over 63.2 million birr, and we will continue to support our project until the end,” Yared said.
Expressing his joy over the successful completion of the first year filling of the GERD, the CEO called on all Ethiopians to continue their unreserved support to the realization of the dam as it is “the symbol of national unity and pride.”
He has also affirmed his company’s readiness to further continue supporting the construction of the dam till its completion.
Deputy Governor of National Bank of Ethiopia, Solomon Desta who attended the ceremony urged other financial institutions to take similar measures as purchase of bond is crucial to enhance the financial needs of GERD at this critical time. “Other financial institutions should follow suit of Nyala Insurance,” Solomon said.
Ethiopians have so far contributed over 13 billion birr for the dam, which is being constructed entirely with domestic funds.
NISCO is one of the leading Insurance Companies in Ethiopia in terms of performance growth and financial position.
It was established in 1995 to engage in general insurance business with a subscribed capital of 25 million birr and paid-up capital of 7 million birr. In 2005, NISCO turned into a composite insurer by adding life business and increasing its paid-up capital to 35 million birr. Currently its paid-up capital reached 416 million birr.
In 2019, NISCO wrote 492 million birr of premium income and realized a gross profit of 184 million birr. Its shareholders’ equity reached 842 million birr while its total assets reached 2.1 billion birr.