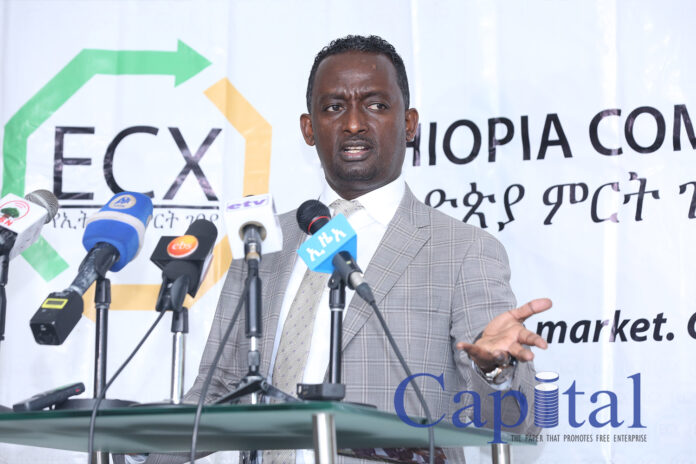 The Ethiopian Commodity Exchange (ECX), an electronic trade platform, states that it will conclude a study for future and forward trading scheme.
The 12 year old trading floor that concludes a successful year in the past budget year said that it has finalized a study for future trading schemes that will be an optional for the current spot contracts trading.
Wondimagegnehu Negera, CEO of ECX, said that the exchange will conclude the study on ways how to commence the scheme.
Since the formation of the modern trading ECX, which is considered exemplary and the first of such kind of trading in Africa, has been engaged in spot trading, while it has undertaken several studies to potentially launch futures trading which is common in most commodity exchanges in other countries. 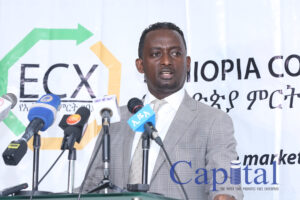 For instance in its 10th year celebration ECX stated that the two trading contracts will be its future strategy that will be introduced at the commodity market.
At the press conference the CEO indicated that third generation trading software development is set to be achieved as a strategy to accelerate the end to end service for this budget year. “The scheme will improve the end to end integration from the initial clearing house stage to settlement,” the CEO said.
The third generation technology also has a role for the commencement of the trading of future and forward contracts.
“We will have central depository that may help for the coming stock market with the support of strong clearing house,” Wondimagegnehu said.
Netsanet Tesfaye, Public Relations Head at ECX, told Capital that the launching of future and forward contracts will be determined by the government’s policy.
“As per our strategy we are interested to commence as soon as possible but it has also third party involvement,” he says adding “at the same time the study may also imply the timeframe when the trading will be started.”
At the just ended trading year ECX, which exclusively facilitate the trading for five export commodities, have achieved its projection.
For the 2019/20 year it has facilitated a trading of close to 762 thousand metric tons of products that are worth 40 billion birr.
“We have achieved 99 and 113 percent of our target in terms of volume and value respectively,” the CEO said.
From the total volume of coffee, the biggest export earnings commodity, took 40 percent followed by sesame seeds that have 34.4 percent shares.
In the year more than 308 thousand metric tons of coffee has been traded with 10 percent over from the target and 18 percent high in value compared with the expected target.
At the same time the performance of sesame seeds met its target, while green mung bean volume traded at the floor met 164 percent of the target.
For the current budget year ECX targeted to include red speckled beans/pinto beans, white pigeon pea and cotton. It targeted to receive 784 thousand metric tons of commodity at its warehouses located in different corners of the country.
Special trading window for local industries that are using soybean and sesame seeds as raw material will also be introduced in the year.