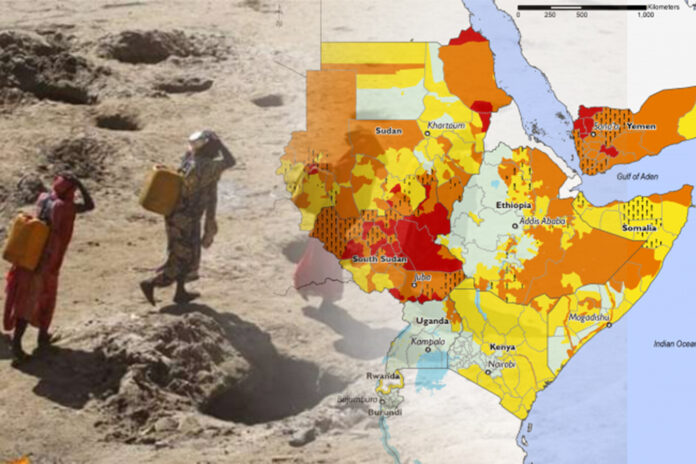 Approximately 50.6 million people or 20 percent of the total population in east Africa region are at risk of being food insecure and require food assistance by the end of 2020 according to the Intergovernmental Authority on Development (IGAD).
The compounding impacts of COVID-19 global pandemic, desert locust invasion, ongoing climatic shocks, conflict and insecurity, adverse macroeconomic shocks, together with protracted food insecurity from past shocks, could lead to a food security crisis in the region states the analysis by IGAD.
Before the current triple crisis, Eastern Africa was already considered one of the most food insecure regions of the world, with nearly 28 million people in need of food assistance in the region frequently requiring urgent humanitarian assistance.
The region hosts over 8 million internally displaced people (IDPs) and 4 million refugees and asylum seekers, all these require food and non-food assistance.
The desert locust invasion is also estimated to affect approximately 2 million people across the region, depriving them of their primary sources of food, and rendering them food insecurity. Over 2.5 million people have been affected by floods across the region during the March to May season. More rains are forecasted in the northern parts of the region between July and September 2020, which could result in more flooding.
An estimated 21.4 million people in the region are anticipated to become acutely food insecure due to the economic impacts of COVID-19 pandemic throughout this year. This has impacted mostly the urban poor, rural poor, and households dependent on informal sectors for their food and income sources.
Following the assessment the IGAD Food Security and Nutrition Response Strategy which was launched on Tuesday August 4, calls upon member states and partners to provide technical and financial support to IGAD to implement a series of short-term interventions to deal with the unfolding crisis.
“Nearly 50.6 million people are projected to be food insecure by the end of 2020 in the IGAD region. With millions of vulnerable populations at risk, IGAD has taken a stance to curb the casualties. This strategy puts in place guidelines for a coherent approach to supporting our citizens and the region. We call on Member States and partners to work together to provide political, technical and financial support to IGAD in the implementation of this comprehensive regional strategy,” said Workneh Gebeyehu, IGAD executive secretary.