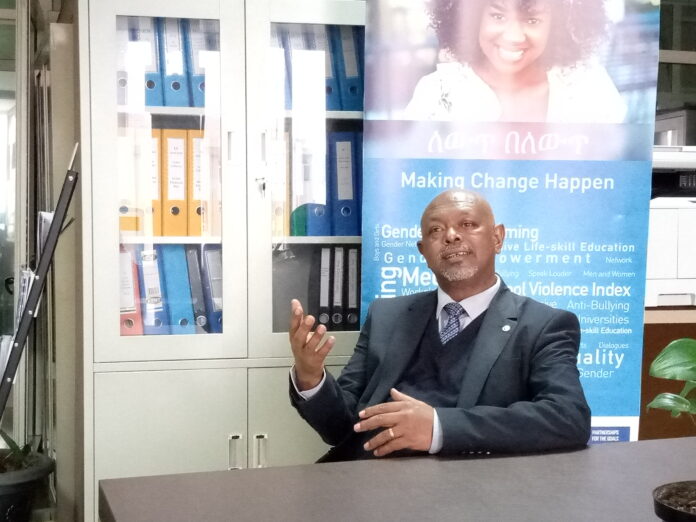 The COVID 19 Pandemic has brought to the forefront a lot of discussions some of which are on gender based violence and management of schools. Capital Newspaper conducted an interview on these issues with Yehualashet G/Michael, Acting Director of Initiative Africa, a local Civil Society Organization working on gender equality, quality education, reducing gender based violence and business support programs.

Capital: Since the first case of COVID 19 in Ethiopia was announced, stay at home was advised as the best precaution. In the following weeks, media reports surfaced of an increase on Violence against Women and Girls. As an organization working on reducing gender based violence, what is Initiative Africa’s response to the situation?
Yehualashet: Gender based violence has been one of the major challenges of most patriarchal societies who are way behind achieving gender equality like Ethiopia. I think the COVID-19 crisis brought new challenging situation and also became an eye opener to understand more about gender equality and see our gender structure.
As you have said there is more news of gender based violence on the media though we are short of statistical evidences to show the increase. For example, in Addis Ababa there are three one-stop-centres – Tirunesh Beijing, Gandhi and Menelik hospitals – which serve those victims of sexual violence but have seen a decrease in reported cases of sexual violence. This is perhaps because women and girls fear going to health centres during this crisis, or perhaps because they live with the people who have caused them harm and they do not have the privacy to report the abuse. On the other hand, there are some studies which disclosed preliminary results that the number of confirmed rape cases and domestic violence is increasing by 25-30%. The instances of the violence have been executed by close relatives, family members and abusive partners. Different regional states have also reported early marriage cases.
Hence, as part of our Making Change Happen Project, we are conducting a survey to have the evidence and plan an intervention.

Capital: Kindly, elaborate more about the Making Change Happen Project.
Yehualashet: In Ethiopia, gender inequalities prevail and are affecting everyone. Not everyone experiences inequality the same way. The situation is worse, and often different, for women and girls. Women are vulnerable to increased risk of acts of violence. Women still remain severely under-represented in key, growth-enhancing fields of education such as science, technology, engineering and mathematics. The labour markets exhibit many “gender gaps” particularly beyond the lowest level of hierarchy. Women remain underrepresented as subjects of news stories, as sources and positively influencing the media than men.
In order to address such issues Initiative Africa started to implement the Making Change Happen Project as we are an organization striving to contribute to the country’s development goals by increasing women’s participation, leadership, influence and decision making. The Making Change Happen Project is focused on addressing gender issues in the workplace, schools and communities, and the media. It is a three years project which ends in June 2021 and supported by the Embassy of Sweden/Sida. The project targets 92 Woredas in six regional states and is working to directly benefit more than 178,590 girls and boys in and out-of-school.

Capital: What is the progress of the project with regards to the components you mentioned?
Yehualashet: As always, we are working with government offices, local civil societies and the community in the project target areas.
With this project we have been trying to propel women in the decision making structure of the private sector and non-governmental organizations; improve sexual and reproductive health of adolescents in secondary schools through health/sport clubs, training materials, equipment’s, information/ education/ communication materials, workshop training; assist secondary school girls in 92 schools gain confidence and capacity they need to get rid of gender based violence in schools and their community by using School Violence Index and making their voice heard and taken into account; and support work places achieve gender equality by building capacity of media that support gender equality objectives.
In response to the pandemic situation, apart from conducting the survey I mentioned earlier, we are organizing online discussion forums on issues of gender based violence and gender equality. Aiming at reaching girls who are staying at home, we are now screening 42 episodes of secondary school science lab experiments performed by Ethiopian girls on the MOE TV Channel in collaboration with the Ministry of Education.

Capital: What is the way forward?
Yehualashet: In the coming 9 months we will be focussing on completing the planned activities and mobilizing more resources for scaling up the project outcomes and the initiatives underway. We are also now getting ready to provide our support to the education offices and the community in the target areas on their efforts of preparation for school re-openings.