The first Ethiopian owned Garment Park has commenced the construction of 14 sheds at Hawassa at a cost of two billion birr.
On a ceremony held on the 6th of September, Hawassa Textile and Industry Park has announced that it has commenced the construction of the garment sheds. The ceremony was graced with the presence of the President of the Sidama Region- Desta Ledamo and state Minister of Trade and Industry- Misganu Arega.
The former Awasa Textile, which changed its name to Hawassa Textile and Industry Park that commenced operation three decades ago has been one of the public enterprise passes on different privatization scheme, which introduced the former ruling coalition, EPRDF, controlled the political power in early 1990s.

During the early stages of the privatization process the company was leased to foreign investors and later on fully privatized. At these stages when it was not performing accordingly it was controlled by banks as collateral until the current owners secured the facility. It is currently located at the South Eastern outskirt of Hawassa town.
CEO and one of three owners of the Hawassa Textile and Industry Park, Ahmed Abderuf affirmed that both him and his partners secured the facility three years ago and now the old textile machines at the existing sheds are being replaced by brand new equipment to commence production in the coming few months..
“To secure the factory, we paid half a billion birr. The purchase and installation of the new machines cost us 200 million birr and in the future an additional 200 million birr will be set for the additional equipment on the textile production at the port,” said Ahmed to the media at the press conference held in relation to the construction launch ceremony.
The factory will have a capacity to produce 14 tons of textiles per day when it commences operation in the coming four months.
He added that the new 14 shades that will be erected in 11,000 square meter area each will be ready for production in less than a year. 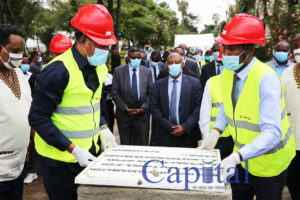 The new project that is currently on a 35 hectare piece of land is being constructed by Sinoma International Engineering Co Ltd. The Chinese state-owned construction company was previously engaged in the expansion of Muger Cement and the erection of Dangote Cement.
“Prominent global brands like Gap have already shown their interests to invest in the sheds,” Ahmed said.
Most Textile and Garment industry parks in the country are controlled by the government. Furthermore, foreign investors are actively involved in the development of the industrial parks. However this is a first for Ethiopia Investors to manage ‘garment park’ and even fully invest on the parks. In addition Ahmed states that his company will expand similar facilities in other parts of the country.
The park in Hawassa is expected to accommodate up to 30,000 jobs. “In terms of size and job opportunity our park will be the second facility,” the CEO explained.

Currently the biggest park in the country is the state owned Hawassa Industry Park, which is located in a similar area just few kilometers from Hawassa Textile and Industry Park.
According to the CEO, most of the products from the existed textile factory and the future facility will be exported.
Misganu explained that the government has a target for this industry to contribute to the GDP from the current 17 percent to double this percentage. He adds that they will provide support to this investment which will contribute massively in job creation and urbanization.
Ahmed further informed Capital that United Bank was the financier for the textile factory investment. The Commercial Bank of Ethiopia is also expected to provide support for the project.
Desta, who leads the new region, said that his government will provide every support that is required in realizing the investment.