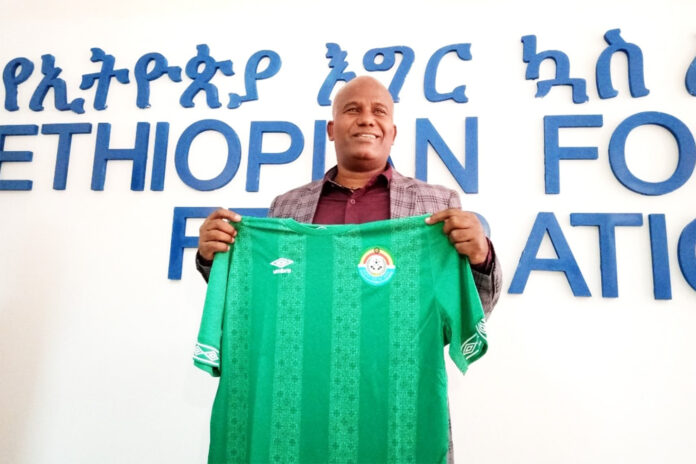 The two months hustling of Ethiopian national team coach appointment came to rest on Monday with former Adama player turned Coach Wubetu Abate taking the helm penning a two year contract. The new appointee took just two days before announcing his deputies including women’s club coach Asrat Abate among his three members coaching staff. “Though the appointment came earlier than expected and took me by surprise, it is my life time dream coming true” Wubetu told reporters.
It took more than two months for Ethiopian Football Federation finally to decide a new national boss replacing Abraham Mebratu whose contract expired at the end of June. Despite huge pressure from national technical director Sewnet Bishaw, Ethiopian Football Coaches’ Association chairman Solomon Abate and number of media outlets, EFF President Ato Issayas Jirra appeared in public to proudly announce that Wubetu is the very ideal person to take over the hot seat.
“In addition to Abraham’s contract expiry we had had given notification that he has not done enough to build a humble national side. Therefore we just picked the right person for the job” Issayas disclosed at the press conference held to introduce Wubetu as the new national coach.
Wubetu took no time to name his deputies with former Ethio Electric Coach Anwar yasin and formerly with Dedebit and Lucy Coach before taking over at Bishoftu and Butagera Coach Asrat Abate as his second in commands. Former national side and Kidus Giorgis popular goal keeper Desalegn G/Giorgis shouldered the duty of producing an ideal goalkeeper for the national side that is under a serious time constraint to prepare.
Back from seven months rest due to Covid19 pandemic, Ethiopian national side faces Niger in away and home double encounter for African nations’ qualification third and fourth round fixtures.