The government has launched a National Fundraising Committee to support those who lost their properties due to the recent violence in Oromia region following the assassination of singer Hachalu Hundesa, on the 1st of July 2020.
In collaboration with the different stakeholders the Ministry of Labor and Social Affairs is going to be the head of the fund raising that aims to re-build properties.
On Monday, September 28, 2020 the Ministry officially launched a committee formed by different stakeholders, including the Ministry itself, employers’ confederation, employees and Ethiopian confederation of Trade Unions. The committee comprising of 31 members from different stakeholders includes Ergoge Tesfaye, Minister of Labor and social Affairs, Adanech Abebe Deputy Mayor of Addis Ababa city and Laek Ayalew, Minister of Revenue.
As disclosed by the Ministry the committee is expected to collect more than 500 million birr in funds from different sectors 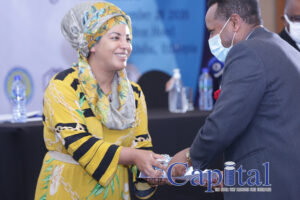 The Ministry emphasizes that these funds will be instrumental to both the property owners (employers) and employees because it will assist in the unburdening process. Furthermore, it will help employees to return to their respective workplaces when the properties become functional again.
Following the assassination of the singer in Addis Ababa, the huge protests by his avid fans led to a catastrophic blazing of property. Law enforcement in the region confirmed that thousands of houses inclusive of health centers, schools, hotels and restaurants were raised to the ground. According to government, property worth 4.7 billion birr has been damaged thus far.