Abay bank which is celebrating its ten year anniversary has given more than 20 million birr to support different national activities in the country.
Abay, which is named after the nation’s primary river has also bought a five million Birr worth of bonds for the construction of the Grand Ethiopian Renaissance Dam (GERD).
According to the bank, Abay has donated 2 million birr each to the biggest Ethiopian Cardiac Center for Children and to Amhara’s regional State Heritage preservation and Tourism Development Fund.
In the aid to support the response of the national disaster and risk management agency, the bank also made a one million contribution.
Following the Prime Minister call to join the “Dine for Nation” event, Abay has allocate 10 million birr to buy tickets to attend the gala dinner that will be hosted to raise funds for the rehabilitation of three tourist destination sites Located at Gorogora in Amhara Regional State, Wonchi in Oromia Regional State and Koisha in Southern Nations, Nationalities & People’s Regional State by the initiation of the Prime Minister Abiy Ahmed.
On Thursday October 1, 2020 the bank has handed over the cheque for the representatives of the prestigious event. 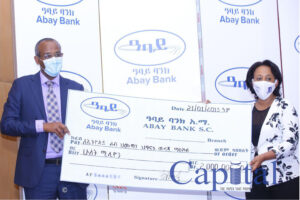 At the onset of the bank’s come up, in July 2010 it started its operations with 174.5 million birr in capital, 128 million birr in paid up capital with 823 shareholders.
In the decade of Abay banks existence it has amassed over one million subscribers, 17.1 billion birr in deposits, 3.4 billion birr in capital and 22 billion birr in assets. Abay also provides 12 different service loans to it million plus customers. It recently introduced a new electro- payment solution called “The Uni-Cash system” integrated with the latest version of core banking.
According to Abay Bank the system will enable customers to make all kinds of payments including school fees with digital technologies.