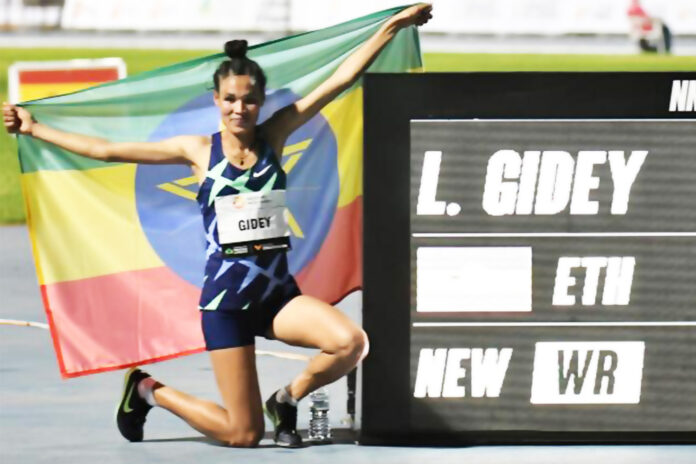 Gidey broke the former world record by five seconds, setting a new standard in women’s distance running
On Wednesday afternoon in Valencia, Spain, Letesenbet Gidey, 22, of Ethiopia shattered the women’s 5,000m world record previously held by Triunesh Dibaba by five seconds, running 14:06.65. Diababa’s record had stood for 12 years.
Gidey was the star of Wednesday’s field, with several pacers assigned directly to her. On top of the human pacers, she was guided by lights on the track indicating world record pace in green and target pace in blue. Gidey ran a flawless 5,000m, steadily ticking off 67- to 68-second laps – frankly, making it look easy. The runner was paced primarily by 3,000m steeplechase world record holder Beatrice Chepkoech, who took her more than halfway in perfect time.
Gidey is also the world record holder in the 15K, which she ran in November 2019, and is the world silver medallist over the 10,000m.
Gidey’s time inches women closer to the 14-minute mark over 5,000m, which is a time that was unthinkable a mere 15 years ago. She is just another example of a woman who is closing the gap between the men’s and women’s world records. The women’s mark is now only 1:31 off the men’s record, held by Joshua Cheptegei, who will attempt to run the men’s 10,000m world record in a few minutes’ time.