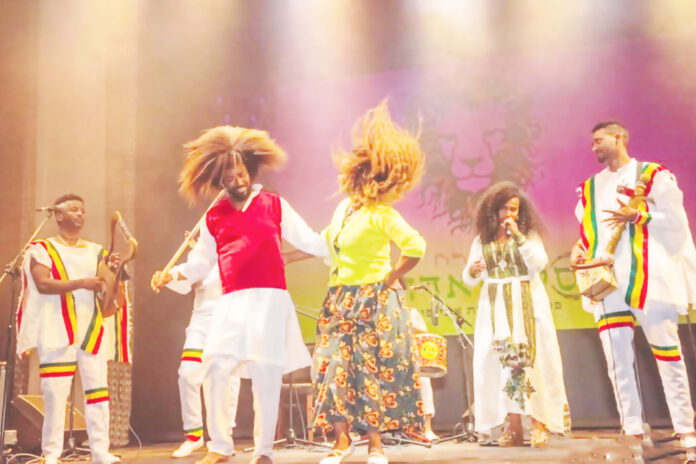 Sigdiada started in 2012, and this year it marks its ninth edition.

“I chose not to be a priest, I chose to be an actor,” said Shay Pardo, an Ethiopian-born performer who founded and runs Sigdiada, a celebration of Ethiopian art and life, which took place from November 26 to 28 at Habimah Theater, but without an audience, due to the pandemic.
Pardo was born in Ethiopia to a family of kessim (spiritual leaders of the Ethiopian Jewish community), and said, “My grandfather was the kohen of kohanim.”
Choosing to become an entertainer instead, Pardo has founded and run several theater companies, including Natale Theater. He has also written and performed a one-man show, Gur Aryeh Yehuda, and appeared in classical theater, including Shakespeare and Chekhov at theaters such as the Khan in Jerusalem, as well as appearing in a number of films and television shows.
But while he isn’t a priest, he sees himself as following in the spirit of his grandfather.
For Pardo, it’s important to present a festival celebrating Ethiopian culture following the Sigd holiday, an Ethiopian religious holiday that has become a national holiday in Israel, and equally important that it be presented at Habimah, Israel’s national theater.
Sigdiada started in 2012, and this year it marks its ninth edition. Pardo convinced the Habimah management that audiences would turn out in large numbers for the festival.
“I wanted it to be in the mainstream of culture, in Habimah,” he explained.
He was inspired by the Apollo Theater in New York City, which presents African-American music and theater.
“It’s in Manhattan, in the heart of New York,” he said.
“I knew that it would have to be high-quality, with the best professionals,” he said. “I don’t like culture that is done in community centers, with no professionals…. There is a lot of talent in the Ethiopian community. The performers had never been given the opportunity before to shine in such a venue before.”
While he acknowledged that most Israelis of Ethiopian descent live in the periphery, he insisted that the mainstream would embrace Sigdiada, and it has.
“About 30% of those who attend are Ethiopian,” he said. “But others came and said, ‘Ethiopian culture isn’t what we thought it was. It’s on an international level.’”
Performers such as Tzvika Adar, Ehud Banai and Koby Oz collaborated on the festival in past years and helped put Sigdiada on the cultural map.
The festival features music, dance and theater, with many performances geared for the whole family. This year there will be a special emphasis on dance, and there will be interactive performances where dancers will teach viewers at home nine styles of Ethiopian dance.
Among the highlights of this year’s festival will be Avera, a musical with Pardo about the journey of a child in an Ethiopian village who leaves and returns at the age of 90 to draw the views that shaped his life. It is based on a book and an exhibit at the Israel Museum. Another performance will feature Ethiopian piyutim, or liturgical poems of devotion.
There will be lectures on aspects of Ethiopian culture by a number of academics, including Prof. Edwin Seroussi, a musicologist, and Dr. Rose Brown. Among those taking part in panel discussions will be Aliyah and Integration Minister Pnina Tamano-Shata.
Normally, the festival would include Ethiopian food and crafts at the theater, but that will have to wait until next year. So will the addition of another city. But Pardo is sure that the festival will provide a welcome distraction from the stress of the coronavirus crisis.
Sigdiada is changing the way Ethiopians are perceived in Israel, Pardo said. “It’s like when someone goes to see a beautiful view and he gets there and he likes it. But if he goes on for another five or 10 minutes, he will see a different view.”
(The Jerusalem Post)