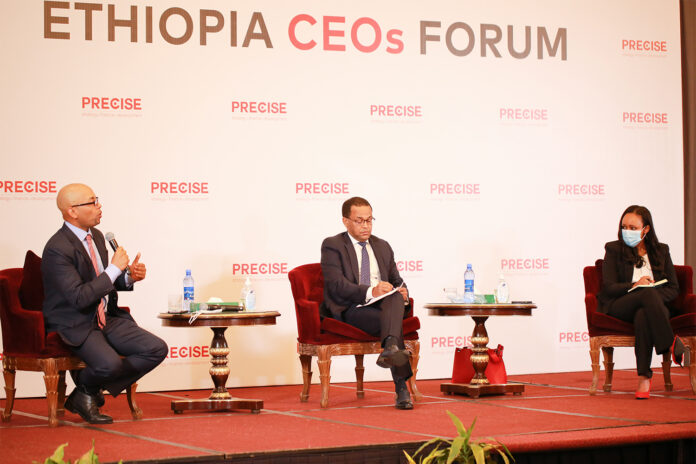 The National Bank of Ethiopia (NBE) disclosed that it has drafted a ten year financial sector roadmap that will be tabled for discussion soon.

During the CEO Forum organized by Precise Consult, National Bank of Ethiopia Governor, Yinager Dessie said that the roadmap will show the path of the financial sector in the coming period.

“We have developed the draft for the roadmap that will be tabled for discussion in the near future before implementation,” he told business leaders who gathered for a breakfast discussion at the Sheraton Addis on Friday December 18.

“We are going to envision what the financial sector would look like in the coming decade,” he explained. “If we have that vision it will be clear what we shall do next for the coming two years, five years and ten year,” he added. He said that the next reform mainly should focus on the financial sector because it is a backbone for the whole other sectors development.

It is recalled that a week ago the Council of Ministers had endorsed a ten-year economic plan that will be applied until 2030. In this plan the government has set massive changes in the economy including the financial sector, while Yinager did not give details about the financial sector roadmap, on whether it would consider opening up the sector for foreign investors or not.

He underlined that the government has made changes to its direction for the last couple of years under its Home Grown Economic Reform Agenda (HGERA) regarding development path and access to finance arena.

The governor said that in the past the government had been the major beneficiary regarding to project financing that is mainly sectored from loan, which created macroeconomic imbalance and massed up the macroeconomic policy that should be corrected under the coming years development plan.

“Under part of the correction process the government decided to focus on projects accomplishment than commence new public project. Due to that in the past two years the private sector secured huge amount of money mainly from public banks than the government,” he said.

He added that it will continue in the coming years ahead, “we will continue to finish the ongoing public projects than allocating fresh loan, while to fill the development demand the government is working on Public Private Partnership and joint venture schemes on infrastructure developments.” As one of the top priorities in the reform, Yinager mentioned that the forex roadmap development was crucial to improve the forex management regime.

He said that the roadmap has shown how the Ethiopian forex management looks like.

“The roadmap shows the step we should take in the coming two to three years and we have already taken some measures,” he added. He hinted that the sector will be more relaxed in the coming years through different step.

Regarding expanding the financial inclusion implementation, the Governor said that the NBE board has approved the financial education strategy besides other massive reforms that it is undertaking.

“In the years to come we will do some more reforms in the financial inclusion and one of that is creating huge awareness among the public about the financial sector, products and sector services,” he said regarding the financial education strategy.

“Awareness creation is a crucial component that we will work with other partners,” he added.

Regarding the Diaspora to invest in the financial sector the Governor said that there is huge progress mainly in the under formation banks.

He said that the lease financing, that is also opened for foreigners’ companies, the government is expected much more participants since it has huge potential, whilst the movement in this sector is very slow.

He said that on lease financing directive, studies are carried out to improve it on the aim to attract more investors on the sector.