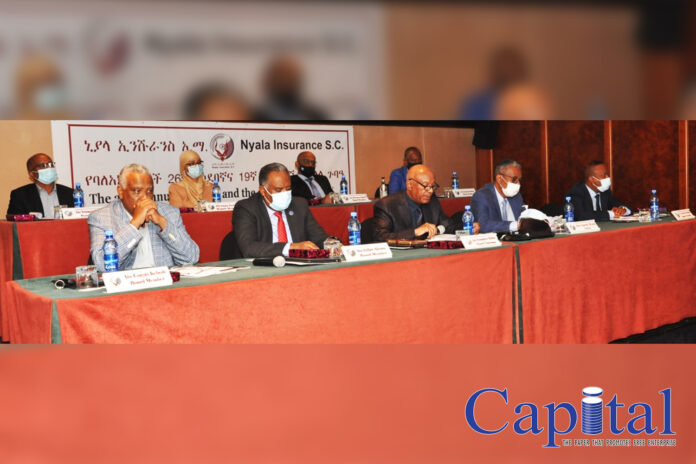 Despite the COVID-19 Pandemic and social unrests in the country, Nyala Insurance S.C. (NISCO) declared it has collected more than half a billion Birr premium income from its general and long-term insurance businesses, an increase of 15 per cent over the preceding similar period.
During presenting the company’s annual performance report to the company’s shareholders who attended the 26th General and the 19th Extra Ordinary General Meeting held at Sheraton Addis on 22nd December 2020, Getachew Birbo, the Chairman of the Board of Directors, disclosed that NISCO has earned Birr 565.3 million premium income, a noteworthy sum as contrasted with the very big challenges in the country.
Moreover, the chairman underlined that the gross profit also jumped from Birr 146.8 million to Birr 149.3 million, and the total asset of the company reached Birr 2.2 billion, depicting an increase of 8 per cent over the last similar period.
According to the chairman’s report, the underwriting surplus generated from the general insurance businesses surpassed Birr 123 million, showing a total growth of 6 per cent as weighed against the preceding year’s records.
By the same token, the chairman revealed NISCO also registered a 28 per cent growth in its long-term (life and health) insurance business and thereby secured Birr 101 million.
Of course, the net claim expenses of the company increased from about Birr 31million to Birr 50 million, a 62 per cent rise from the last year, he added.
In his report, the chairman indicated that the reasons for the noteworthy achievements in the premium income were due to the company’s prudent underwriting practices and implementation of business innovations based on the customers’ needs and concerns.
The shareholders of the company have also decided to increase the paid-up capital to Birr 600 million, currently the highest in the Ethiopian insurance industry.
Yared Mola, the Chief Executive Officer of Nyala Insurance S.C., on his part said the outstanding achievements so far realized within the company are the results of thoughtfully designed business development strategies, risk management techniques and efficient claim handling processes that NISCO has keenly put in place.
According to the CEO, NISCO’s being prior in providing COVID-19 insurance policies to cover deaths and related risks of the pandemic has enabled it to attract interests and attentions from many international and domestic clients.
Yared went on to say his company is dedicatedly exerting utmost efforts to ensure quality services and innovative insure-tech products by focusing on the insurance needs of the digital natives.
Established in 1995 with a paid-up capital of Birr 7 million, Nyala Insurance is now near to finalizing the construction of its 18-floor headquarter building on Bole Road, Africa Avenue.