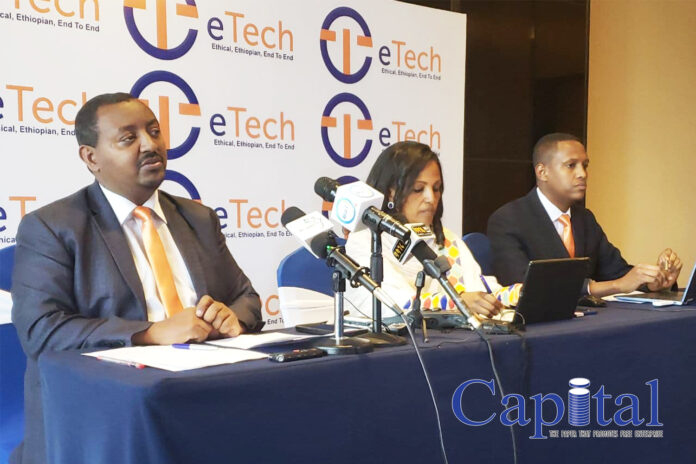 eTech invites the public to take hold of remaining shares

eTech share company, the local IT firm, announces its operation by offering the remain 20 percent of share for the public on its 200 million birr investment. The company has expressed its interest on the telecom reform that will have partial privatization on the telecom monopoly.
The company that formed about two months ago to engage on the emerging IT business that the government lately gave priority has disclosed that since its formation it has already handled about four projects.
Before the launching ceremony held on Thursday January 14 at Skylight Ethiopian Hotel, founders told journalists at the press conference that the company targets to manage inclusive IT business by local experts to local market.
Melaku Ezezew, Board chairperson, said that Ethiopia is buying the IT products with huge amount of foreign currency from aboard, while there is growing skilled labour in the country.
“The IT service and products have huge demand in the country but the sector in the country is at its infancy and therefore it will be expanding,” he said.
“Because the products are developed in other countries there are compatibility issues with Ethiopian demand. It is therefore one of the major challenges on the sector and service in the country,” he explained.
He reminded that the government is growing the sector through initiatives that it launched such as digital strategy 2025 to boost the sector regarding service, product, job and other areas, “It is good incitation for the establishment of strong IT firms in terms of capital and capacity.”
“The IT sector develops a holistic success in the economy and social sectors, due to that for the past two years the government has given proper attention to improve the sector. Understanding this we decide to establish a strong company in terms of capital and capacity,” Melaku, who is president of the national chamber, added.
According to the board chairperson, the company has included Ethiopians and the diaspora with ample experience on the sector.
“Because of lack of facilities in the country, brain drain on the IT sector was one of the problems that the country experienced but under our initiative we can tap the expertise of the diaspora who are engaged on the IT industry in different countries with big companies,” he added.
He said that the higher education facilities in the IT sector had produced huge amount of professionals for the past close to two decades, while the sector was not proportionally developed due to that most of them left the country to get jobs.
So far the company has 300 shareholders and about 200 of them are the diaspora from 17 countries in the business of the IT sector.
The company leaders said that half of the share has sold by foreign currency for the diaspora.
Shimelis Gebremedhin, CEO of eTech, said that country must work to tap the benefit that the sector brews before others take it.
“The technology ecosystem must be established locally than buying products from abroad. It is our goal to operate in the country,” he said.
The company has targeted to engage on the software development, cyber security and consultancy service, telecom and infrastructure development and service, and engagements on the financial service through fin-tech, which recently the National Bank of Ethiopia (NBE) opened to the non-financial sector operators.
Shimelis reminded that the company has also given priority to cyber security that is currently being handled by a single public institution called Information Network Security Agency. The firm aims to support the agency with other local IT firms.
“When we studied to commence the new company we identified that ethics is one of the challenge on the sector in the country. We have targeted to provide ethical, Ethiopian born and end to end service for customers,” the CEO explained.
“Regarding laws and strategy, currently the government has provided a conducive environment where we are able to create Ethiopian and big technology firms that shall fill the existed vast and growing sector,” he added.
He reminded that Ethiopians should be alert on the telecom reform, and encouraged them to be a major player before it is taken over by others.
Melaku said that the IT firm is closely following up the development regarding the telecom reform and partial privatization on Ethio Telecom. The government has announced that it will sale 5 percent of the Ethio Telecom share for Ethiopians and the diaspora besides 40 percent for foreign companies.
Shimelis indicated that the company has already engaged on four projects that it secured from private clients. He expounded that this shows how the sector is very big and is in need of such kind of local companies.
“We will provide product and service that are really compatible and automated system with the country,” he added.
The company leaders said that it is engaged on platform like payment system, ecommerce and e-payment creation, IT security, software development, development.
The company disclosed that it is discussing with the government to get a facility at ICT Park, which was established few years ago on the aim to form an Ethiopian Silicon Valley. “At the facility we will have incubation centers that will produce sharp players on the service we provide,” Shimelis said.
Mekdes Mintesnot, Board Member, said that the company has targeted to be one of the top global IT business leaders by 2030.
Shimelis said that on the first cycle, share sales of only 20 percent or 40 million birr remain that is now open to be bought by interested buyers.
Shimelis told Capital that currently it is undertaking 2 software developments on electronic hospital management system, which is led by USA based development leader, and Etech portal. “Telecom value added service on electronic voucher distribution application and cyber security consultancy are some others projects besides these projects that we are looking into.”