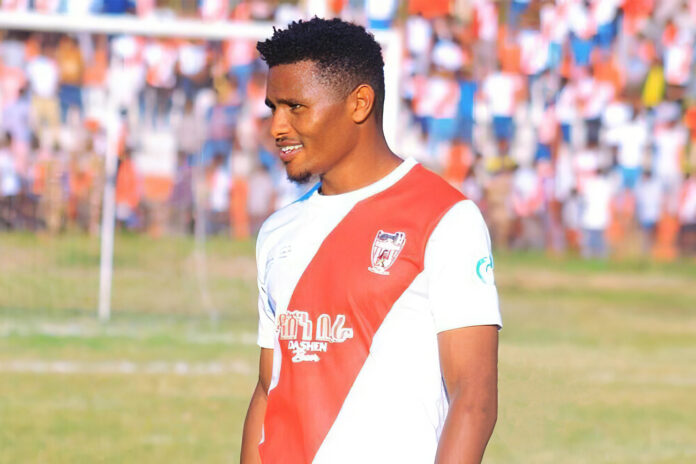 A braid from the spot kick over Adama Ketema on Wednesday, Fasil Ketema one man strike force Mujib Kasim took his goal tally to eleven to be in command of Betking Ethiopian premier league new season leading scorers driving seat. Ethiopia Bunna Abubaker Naser is second followed by all-time top scorers Getaneh Kebede of St George.
In superb form since the opening fixtures, Mujib Kasim managed to score in almost every game including the season’s first hatrick over Jimma AbaJifar. The hard working striker who not only netting match winning goals like his solo strike to end Hadiya Hosana’s unbeaten run a week earlier, Mujib’s unselfish personality at the goal mouth is much praised by Coach Seyoum Kebede as well his team mates.
Banging eleven out of 18 goals in just eight matches, Fasil appeared to be much dependent on the striker who helped them take top of the league table three points clear of second place Ethiopia Bunna. Coach Seyoum needs to think a second striker who could be at hand for emergency.
Bunna’s target boy Abubakar scored the second goal on Thursday’s 3-1 victory over bottom of the table AbaJifar to take his goal tally to nine in seven matches. A ball playing side with Abubaker in the front, The Brown Shirts appears to be in the right track to seriously battle for the title since more than half a dozen years. Ethiopia Bunna is second in the table with 16 points from seven matches.
Having a hat trick over AbaJifar, EPL all-time top scorer Getaneh Kebede is third with seven goals from seven outings. Veteran Salhadin Said fast recovering his old form, Abel Yalew and Gadisa Mebrate battling for a regular front spot, Getaneh appeared to have no option but scoring goals in almost every single game.