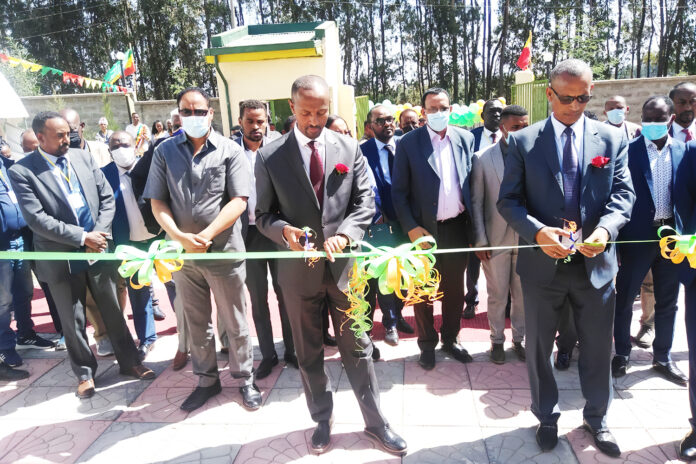 Ethiopian Commodity Exchange /ECX/ grabs 19.8 billion birr revenue and 119 million birr in profit in the first half of the current fiscal year. During the half, ECX also launched its forth electronics market center at Gonder in Amhara region meanwhile it is building two new electronic market centers at Adama and Jimma.
In the last six month, the commodity exchange center has sold 320,000 tons of commodities worth 19.8 billion, which is 99 percent of the target in terms of volume and 111 percent in Value from the targeted 323,694 ton commodity.
When it compares to last year same period the number has shown 5 percent decline in volume and 13 percent in value. The conflict break out in the northern part of the country where oil seeds are highly produced has disrupted farmers and producers to supply their products, also contraband trading has been a challenge facing the commodity trading according to the CEO, Wendmagegnew Negera.
“Increasing of the international commodity price has played a role to the increase of the revenue than expected,” said the CEO explaining how ECX grabbed 119 million profits in the last six month.
ECX has been working aggressively to fill the gap on the oilseed trade disrupted by the conflict break out in the Tigray regional state. “At the time of the conflict ECX has facilitated optional branches to farmers to provide their production at Abrehajira and Gonder branches. “Even if it is a peak season for trading oil seeds, the instability has not affected the trading that much,” the CEO stated.
From the 320,000 tons of commodity sesame has taken the majority share of 140,000 tons which is 122 percent of the plan which was 115,000 tons. In the special marketing window for agro-processing industries launched on October 2020, ECX has also traded 10,592 tons of soya beans by 198 million birr. Although as Wendmagegnehu said the volume of coffee has shown decline from previous times. Therefore Ethiopia’s oilseed sector plays an important role in generating foreign exchange earnings. The three major oilseed crops (sesame, soybean, and Niger seed) contribute to nearly 20 percent of Ethiopia’s total agricultural export earnings, second only to coffee.
ECX has three electronic market center at Hawassa, Humera, and Nekemte and next week it will launch its forth at Gonder. Furthermore, it is building two new branches at Mizan Tefferi and Tepi. It will be launching two new warehouses in Bule Hora and Metu. ECX has also done a feasibility study to start trading nine more products, including cotton, spices and pulses. With the addition of bean sprouts and white pigeons, the number of commodities on the market shall increases to 12 items. In particular, the pickled bean sprouts include red, white, gray, cream, yellow, and black beans
In the last six months ECX also trained 698 traders in e-commerce and e-bidding and received certificates. – Training was also been provided to 517 stakeholders and professionals in various woredas and cities on product quality rating.
“In new and emerging e-commerce centers, we are making extensive use of the system to enable farmers and suppliers to sell their products directly without being a member of the Commodity Exchange,” ECX elaborated.
Recently Enat and Zemen banks also joined the ECX transaction to enable farmers and suppliers implement modern farming, allowing ECX to working with all commercial banks in the country. Currently ECX has 23 branches that have warehouses for receiving and delivering of agriculture products. Similarly, feasibility study has been undergone to open branches at Shakiso, Bahirdar and Kelem –welega.
In the payment process 379 million birr, two percent withholding tax and 30 million VAT has also been collected. ECX plans to trade 784 thousand tons of produce this fiscal year.