Arba Minch Crocodile Ranch (AMCR) is set to expand its hub to a zoo by adding more animals including python snakes and civets.
The ranch that has been in service for over three decade was damaged by flood about 15 years ago and has since then relocated 7km from Arba Minch town, 444 km south of Addis Ababa in SNNP.
Wondimu Abate, Office Coordinator of AMCR, said that the facility mainly formed for conservation of the reptile is undertaking a study by the support of Arba Minch University to improve its service.
He said that currently the ranch is providing touristic services; however it was exporting the Nile crocodile skin almost two decades ago and has since then halted that operation.
Wondimu told Capital that the crocodile conservation center that was established 500 meter from the offshore of Lake Abaya relocated about 14 years ago and retreated 1.5 km to the land and 7 km from the town since the original location was smashed by the El Niño flood that occurred in 2007. 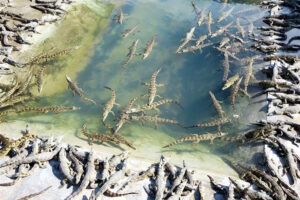 The current AMCR has eight hectares of land worth of compound and thus presents a potential to add further services.
Under the new initiative, python fences will be constructed, while, civet, fishery production centre, ostrich farm and aquarium will be established besides expanding the green area.
The ranch head said that the fishery production will have further support for the ranch that shall be a source of food for the crocodiles.
“Based on the new plan the ranch will be transformed to a zoo that will enable the facility to get more revenue by attracting more tourists,” he says, adding that, “It will help to keep the capacity to cover its cost by its self.”
“Currently, we have budget constrain to maintain our operation,” he explained. The ranch that has 35 permanent staff is administered by SNNP Culture, Tourism and Sport Bureau.
He said that the crocodile conservation center has 2, 600 at its stock that needs over a million birr to provide feeds, while salary is also the other cost, “In order to maintain our cost, we have been finalizing our business management plan for the coming year, which considered expanding further revenue sources.”
He explained that one of the tourist destinations in Arba Minch and the area is the ranch that shall generate more revenue if it improves its services.
According to the plan nongovernmental funding would be a potential for the new development.
The crocodile conservation center head said that the Hailemariam and Roman Foundation are working to support the endangered Netch Sar National Park that is located around the town of Arba Minch. The foundation has also promised to support the ranch on the initiative to add more touristic attractions at the conservation centre.
“If we have additional attraction, the tourist visiting time and number will increase that will help to improve the revenue stream,” Wondimu said.
In 1983 Ministry of Agriculture, under agreement with the Food and Agriculture Organization (FAO), established a crocodile management program based upon ranching, with a particular focus at Lake Chamo. As part of this program the government built, equipped, and staffed a crocodile farm at Arba Minch near Lake Chamo, on the shores of Lake Abaya. The first Nile crocodile hatching were introduced into the farm in 1985.
The conservation was established by the initiative of international crocodile researchers on the aim to mitigate the illegal killings of crocodiles globally. Meanwhile it was mainly formed for conversation it and had also been engaged in the crocodile skin business. Tourism is also another business for the hub.
Wondimu explained that COVID 19 had affected the revenue of AMCR, “Meanwhile AMCR was not affected on its skin sales because we have not been selling for over two decades now.”
“The information indicated that since 2000 the skin sale has been limited on research purpose and promotion. If we get a market we have over 3,600 crocodile’s skin at the stock, and we have 1,000 crocodiles available for slaughter,” he explained.
Crocodile that are three to four year of age are fully grown for slaughter and its skin is ready for market, “Feeding crocodiles more than four years of age is not feasible so we slaughter and stock the skin at Addis Ababa on Leather Industries Development Institute,” AMCR head explained and said that the ranch has a potential to supply up to 2,000 skin per annum if the market is available.
The skin market has degraded in the past couple decades which has impacted AMCR which was projected to sale up to 2,000 skins per annum as per the original plan of its formation and its price determined according to belly width. A centimeter of the skin might be tagged up to USD 5.
The skin trade should also be improved to generate revenue for the sector. He recommended the trading based on negotiation than the current bid scheme.
Wondium said that in the new study, there is a consideration to cooperate with the private sector to engage on the skin business. Under the new plan, private leather sector investors may be involved locally which will bring value addition besides assessing the market.
The reptile meat market on matters sales has not yet had progress however there are negotiations with some foreign buyers but it is not yet sealed.