Dashen Bank, which is a pioneer on introducing new services on the sector expressed that it will celebrate its quarter of a century anniversary with different events in complement with introduction of new services in the banking sector.
The bank that is one of the first three private banks since free market was reintroduced in early 1990s has announced that it will have eventful months in the coming half year.
The company that opened its door as of January 1st 1996 said that it will celebrate the 25th anniversary by undertaking; panel discussions correlated with the financial sector, corporate social responsibility, recognizing the years with partners and staffs and introducing new services on the sector besides revitalizing the coming years with new energy. 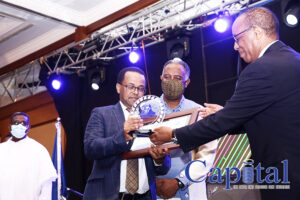 The celebration started as of February 25 mid day in the ceremony held at the head quarter area and thanksgiving event ran through the afternoon at Sheraton with the presence of Yinager Dessie, Governor of National Bank of Ethiopia (NBE). On the same day the bank has provided free transport via 20 city buses for the capital city dwellers in relation to its anniversary celebrities.
From various celebration activities the bank has planned to engage on tree plantations in the coming rainy season at Ras Dashen Mountain, the highest peak in the country that the bank backed its name for its brand.
During the press conference held on Wednesday February 24, Asfaw Alemu, President of Dashen Bank, said that the bank has decided to establish a unique link with the mountain, due to that several programs including corporate social responsibility projects will be undertaken there every year.
He said that the bank will reaffirm its position on introducing new services for the sector.
Dashen was the pioneer in introducing ATM and debit card banking as well as international cards like Visa and MasterCard to the Ethiopian market.
Asfaw said that few have come up with new digital platform such as cobranded card that links Queens Supermarket and Addis Home Depot. 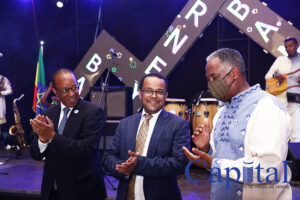 The digital platform enables smooth trading by settling any sales services done through the bank by the stated two retail companies that are under the Midroc Investment Group.
He said that the bank has been in the market as a pioneer in introducing edge cutting products and services on the market including mobile and internet banking that will continue with better upgrades with the new version.
“Within the coming six months we will introduce new services,” he says, “We will expand the co-branding card with other companies. New services related with remittance will be emplaced in the near future.”
“We are now engaged on a milestone investment to introduce massive products on technology bases,” Asfaw said, while he declined to give details.
The President has also commented on the financial intermediation which NBE allowed banks to access foreign currency as intermediary of hard currency for their customers in the country. 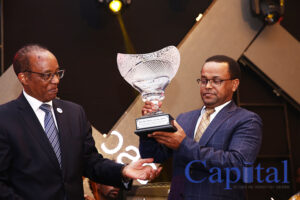 “The NBE directive has a target to ease the hard currency shortage of the country due to that we are assessing the opportunity but it is premature to give details,” he said.
The bank that was formed with 50 million birr authorized capital and ten branches at its inception now has 450 branches under 12 districts, 10 forex bureaus, 350 ATMs, and 2.5 million account holders. Its asset has expanded to 67 billion birr and its capital has reached 8.6 billion birr. It is also one of strongest banks in interest free banking business.
The bank in now in partnership with KPMG for a strategy formulation and implementation consultancy of its five year strategy plan and 10 year road map.
Under the plan, the bank envisions to be one of the best banks in Africa.