When it came to the environment, plastic bags – among other single-use plastic products – were the main detrimental culprits. This was due to the ease of accessibility and fast production rates of plastic bags, which were then discarded without a second thought — or second use. Although not all countries across the globe have legally introduced a plastic bag ban, most countries have done so with the help of news and information about the negative aspects of plastic. Capital Ethiopia reports global news and updates over a wide range of topics, including the plastic bag ban.

In order to understand the harmful effects single-use plastic bags cause on the environment, let’s understand why they are such a threat…

Plastic bags are used worldwide for storing, carrying, and packaging a variety of items. They are easily manufactured, thus allowing a large number to enter the economy at any given time. Plastic bags are produced from a polymer where it begins its journey as pre-coloured resin pellets. This polymer is extracted from oil or gas and formed into little pellets ready to be heated and extruded. Common polymers utilised in manufacturing plastic bags are polyethylene and polypropylene. These polymers are long chains of ethylene and propylene, respectively. Both polymers require a catalyst to break the double bond of the carbon molecules, allowing more molecules to bond together, thus, increasing the length of the chain.

The pellets are fed into a hopper where they are heated and extruded into a die. The die moulds the plastic into the respective shape after which they are cooled, stored, and sent into the world. The thickness of these bags varies according to their use, however thin single-use plastic bags — less than 80 microns (approximately 3 mils) — are banned in various countries. A thicker bag is used for more long-term applications but takes longer to break down. 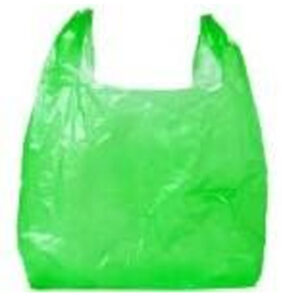 Although the USA has not passed a legal ban on plastic bags, most states within America have, in some way introduced a bag ban. These methods can include the full ban of plastic bags, or a fee-only approach, whereby a fee is charged for every plastic bag bought. Other states, such as Massachusetts, have banned single-use plastic bags, but have, instead, introduced reusable plastic bags with a thickness between 2.5 mils to 4 mils. Some states allow an alternative – paper bags – that must be at comprised least 40 % post-consumer recycled paper.

Many countries on the African continent, as reported by Capital Ethiopia, have banned producing or importing plastic bags. Although recycling or reusing of these plastic bags is encouraged, most people have conformed to their single-use status and have discarded them without a second thought. South Africa also introduced a fee for each plastic bag and has encouraged purchasing and using multiple-use bags made of woven cotton to combat the sale and use of plastic bags.

The world identified the need to alter consumerism by implementing an alternative to plastic bags. This alternative was widely received as a result of contributing positively to the environment.

To find out more about the ban on plastic bags, visit Capital Ethiopia.