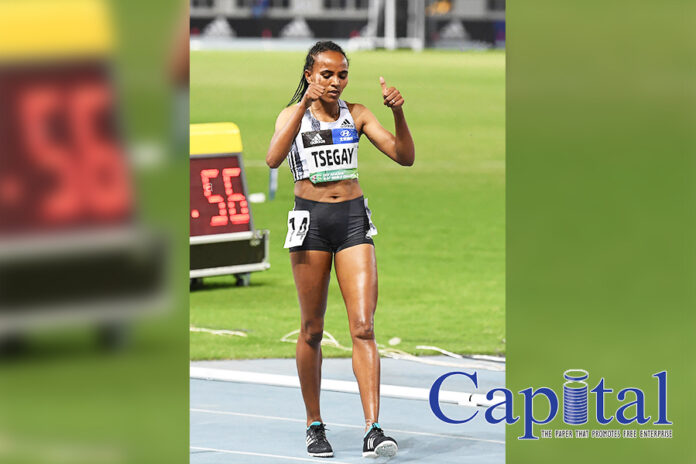 Gudaf Tsegay remembers her early days in the sport when she would look up to two-time Olympic gold medalist Meseret Defar as a role model.
Like many top Ethiopian runners, Gudaf – the newly minted world indoor 1500m record-holder – began running in school. The youngest of five, Gudaf was living in the city of Bora, in the region of Tigray, but knew little about the range of distances she could run and the scores of Ethiopian women she could look up to.
While Gudaf dreamed of emulating Dibaba’s success, breaking her icon’s world record was not a part of the original plan. “Genzebe is a strong athlete,” Gudaf said last week in Addis Ababa, having briefly returned to the Ethiopian capital in between her appearances on the World Athletics Indoor Tour.
In a year where forming concrete plans is difficult, Gudaf is not sure which world record she will go after next, but she has her eyes set on breaking more records. She and her coach are confident there will be a chance outdoors to chase a world record in either the 1500m or 5000m.
At 24 years old, Gudaf is putting no limitations on herself for time or distance. She believes, and has believed for a long time, that she can compete at a world-class level from the 800m to the 5000m, and break intimidating records along the way.
Despite her humble and unassuming demeanor, Gudaf’s bold ambitions are not new. The only novel aspect of her training she now contends with is that the Ethiopian hero she looks up to now is herself.