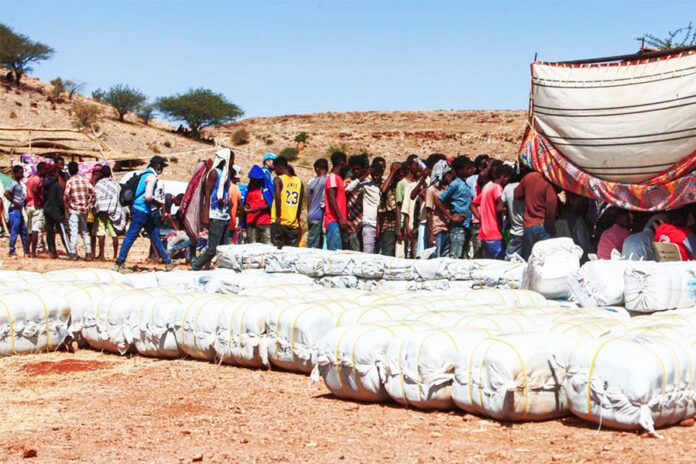 Internally Displaced Persons (IDPs) in Tigray region have surpassed the one million mark. The dire situation in the northern part of the country, Tigray region, remains concerning as the number of IDPs soars from day to day with conflict continuing in some parts of the region. The total population of Tigray region is estimated to stand at 5.5 million of which more than 1 million have been internally displaced by the current situation in the region.
“Violence and lack of assistance in the region especially in rural areas have driven displacement of people searching for safety and aid in the main towns across Tigray,” said Etenesh Negussie, communication head of the new interim government of the region.
“Up to this week, around 92,000 IDPs have entered the city of Mekelle,” highlighted Etenesh. In addition according to the Norwegian Refugee Council /NRC/, over 400,000 people fleeing intensifying conflict in western Tigray have recently arrived in Shire adding that 4.5 million people in Tigray region require humanitarian assistance.
As she said, there is a continues displacement of people from the western part of the region due to the tension between Amhara and Tigray ethnic groups, also the strain around Eritrea boarder and the unstopped conflict around the southern part of the region has aggravate the situation.
Even though it is becoming difficult to assist and support all the IDPs, it has been reported that people in the region are trying to reach towns where assistance is being delivered. Similarly, as Etenesh told Capital, the regional government is working to build camps for the internally displaced persons in the town of Mekelle.
Thousands of people, who have been sheltering in schools and universities and already living in extremely concerning conditions, are facing the prospect of relocation within one month due to back-to-school plans.
“Humanitarian partners are facing significant difficulties in identifying suitable alternative sites for displaced people and are stressing the urgent need to provide emergency shelter, water, sanitation and hygiene services, as well as supporting the management of settlements.
To date, nearly 62,000 refugees have been registered at the crossing points along the Sudan-Ethiopia border. To this end, humanitarian response efforts are focused on filling the existing gap in service delivery in the reception facilities.
It has been over four months since the law enforcement operation started in the Tigray region following the 4th of November 2020 attack on the Northern Command of Ethiopian National Defense Force (ENDF) by the Tigray Liberation Front.
After three weeks of military offense in Tigray region to enforce law and bring in the so called criminal group of Tigray Peoples Liberation Front /TPLF/ leaders on November 28, the government has announced the battle came to an end after taking Mekele, the capital city of the region, from the so called criminal group of TPLF.
It is to be recalled that the House of Federation had endorsed to establish an interim administration in Tigray Regional State following the defiant TPLF. The Interim Administration was established with the participation of independent and neutral scholars and political parties operating in Tigray.
Prime Minister Abiy, on the 3rd of March, announced that aid agencies can operate in the region by providing a notification to the Ministry of Peace. Following this significant development, organizations have begun notifying the Ministry and are working to urgently improve access to rural areas.
Following the transition to a flexible notification system for access, several organizations have deployed international staff to Tigray to scale up of the response.
Despite some progress in accessible areas, many people remain in hard-to-reach areas due to insecurity, logistical and administrative hurdles, where assistance is needed.