Ministry of Transport (MoT) expressed that ownership and management of seaport will be determined by the ten year transport plan.
The transport sector development in general is expected to consume 3.2 trillion birr or USD 75 billion in the coming decade, while the sector that is mostly preserved for public and domestic investors will expand its playground to foreign investors in different schemes.
Dagmawit Moges, Minister of Transport, said that the transport sector has six strategies, 22 sub strategies goals and 98 interventions in the logistics sector.
One of the interventions is looking into the port usage of the country. “Under the initiative we may have a program that shall be turned to become a project,” she said.
For the implantation of the strategy, the Council of Ministers’ have formed a National Logistics Council that is chaired by MoT and includes Minister of Trade and Industry, Ministry of Revenue, Ministry of Agriculture, Ministry of Finance, National Bank of Ethiopia, Customs Commission, Investment Commission and representative of the private sector logistics actors. 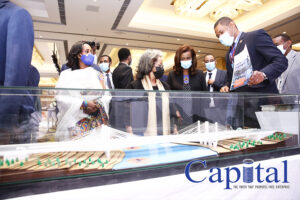 The one commitment area of the Council that commences its work this budget year is looking at an alternative port service and increase the overall logistics efficiency.
“On its first six months evaluation, it has underscored that relatively undertaking some sort of activity regarding to the port issue and using alternative hubs,” she says, “For instance in the past, 99 percent of port service was covered by ports around the city of Djibouti but that has declined to 92 percent since we are using Berbera and Port Sudan in addition to the new facility of Port of Tadjourah.”
She added that there are several interventions which will be included in the logistics strategy including management of port.
Dagmawit told Capital that the management of port will also be answered in the coming year, “While it is determined by detailed studies.”
On his first foreign trip when he became a Prime Minister, Abiy Ahmed, paid a visit to Djibouti. In relation to his trip, a joint port and other logistics development had been mentioned between the logistics partner country. It has also been expressed of Ethiopia’s interests to developing and owning ports in other neighboring countries like Sudan and Kenya.
“Investments in regional countries will be determined by different agreements that Ethiopia will forge forward with other countries. It will also need several discussions, negotiations and agreements to come up to an end,” the Transport Minister said.
MoT has disclosed that the ten year development plan on the transport sector, which is crucial for other economic development as well.
The transport sector development has included diversified sub sectors in different investment. To attain the goals, government under its transport sector policy revision has decided to open up the highly closed logistics and other transport sub-sector in different schemes including; joint venture, public private partnership and full investment.
The required investment for the development is 3.2 trillion birr for the coming ten years.
From the 3.2 trillion birr, 69.55 billion birr will be covered by the money collected from the service provided by the sector and the rest will be financed by the government budget, which is about 2.2 trillion birr, loans of 582 billion birr and foreign aids of 164.5 billion birr.
The intervention of the private sector including foreign investors has also been considered as a major source of investment in the sector.
To attain the objective MoT has hosted the first transport sector investment summit that was held for three days from Wednesday March 24.
So far at the summit, government has availed 44 projects in five transport sub sector like aviation, logistics, railway, and infrastructure like toll road and transport service.
Dagmawit said that some of the selected projects have got detailed studies, some of them are partly concluded and others are in preliminary and early stages.
On the summit that gathered different big and significant global players, the projects and future approaches have been discussed as highlighted:
Multimodal
Since the amalgamation of four public enterprises in to Ethiopian Shipping and Logistics Service Enterprise, about 11 years ago, the government had introduced the multimodal scheme on the aim to improve the logistics sector, which was criticized as one of the major challenges for the economic activity in the country.
However, the scheme is solely given to the enterprise that became controversial as the private sector claimed in different occasion.
Even though the logistics and transport sector has been referred to as ‘opened for local investors’ the government had been the dominant player.
Since the reform was introduced, about three years ago, the former ruling party’s higher body that included senior leadership of TPLF had decided on the opening up of different sectors including the logistics sector. As per the decision, the government had announced that it will sale shares on Ethiopian Shipping and Logistics Service Enterprise and allow foreign investors to invest up to 49 percent share on the logistics business which was followed by the coming of some foreign companies which took shares on some private freight forwarding companies.
However, the real change has not yet been fully fulfilled.
On her latest press conference, Dagmawit said that the controversial monopoly on multimodal will be opened for limited private actors.
She said that the national council has decided to open the multimodal sector for not more than five companies as per the detail study that was tabled for the council.
She added that the criteria that were supposed to be fulfilled by new entrants have been discussed on first round at the council, “In the coming meeting we expect that the council will give final decision on the criteria and will call companies.”
However, experts on the sector have still criticized the new decision. One of those is Salahadin Khalifa, Vice Chairperson of Region Africa and Middle East of International Federation of Freight Forwarders Associations (FIATA) and former president of Ethiopian Freight Forwarders and Shipping Agents Association (EFFSAA).
He argued that the government is still looking at the sector very sensitively, “It was better to open the sector for everybody than limiting it to only five investors.”
“Because the interest to invest on the area is very high, we are lagging on the logistics and transport sector compared with other countries around the globe which costs the society. So to improve that, players’ number should be expanded,” he recommended expressing why the government should decide to open the sector.
“As per the science, the multimodal operation shall be handled in a single office, while in the Ethiopian context there are unnecessary criteria like ownership of vessel, ownership of dry port and trucks, which is unnecessary compared with the trend in the global experience,” he elaborated.
According to Salahadin, head and owner of Samatra Logistics and Shipping PLC, one of the biggest logistics companies in the country, the multimodal operation is all about coordinating different logistics and transport activities and reduce the logistics sector cost that contributes for the inflation.
“Efficiency will be real if the sector was opened without restrictions giving allowance to competitive business,” he argued.