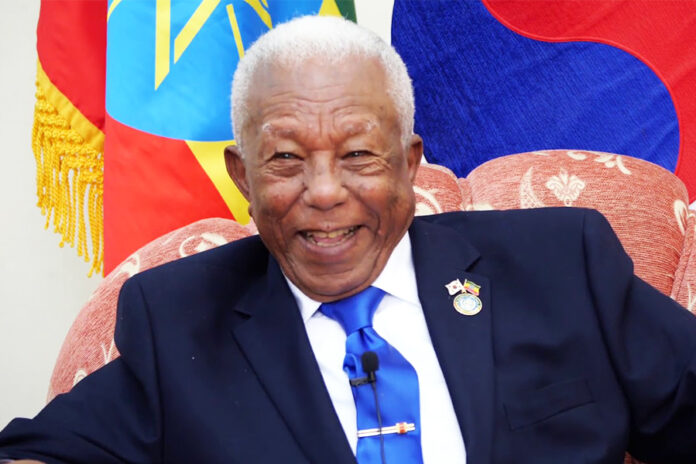 Colonel Melese Tessema who was the president of the Ethiopian Korean War Veterans’ Association has died at the age of 90, on Friday April 9 2021.
Colonel Melese was a retired service man who fought in Korea shortly after graduating from the Ethiopian military academy in 1951. As a second lieutenant of the Imperial Ethiopian Army, he led a platoon in Korea for fifteen months. Upon return to his country, he led security forces until Haile Selassie left office. After that, he worked for welfare associations before becoming president of Korean War veterans. Although he had never heard of Korea before he left for the war, Melese Tessema went on to know far more about Korea and further had great love for its people.
Colonel Melese Tessema arrived in the first detachment on May 6 of 1951 in Korea when the city was in ruins. Orphaned children cried in the streets and poverty reigned all over. When he returned recently to see the country he fought for, he was surprised at the progress of modern South Korea.
Colonel Melese Tessema was a remarkable man and a transparent strong soldier. He acknowledged feeling afraid as he joined the fighting in the Korean War, but he asserted that soldiers cannot allow fear to interfere with a mission. He arrived in Kumhwa and fought the Chinese on Hill 358. He remained defiant even though Shrapnel from a mortar shell injured his leg during the fighting. Colonel Melese Tessema went on to receive a Korean, Ethiopian, and United States awards, including the United States bronze star.
Since his return from Korea, Colonel Melese Tessema has wished that Ethiopia could learn from the economic successes of South Korea as he longed for astronomical success for the country. May his wishes truly come to pass.
He was laid to rest at the Holy Trinity Cathedral on Saturday April 10.