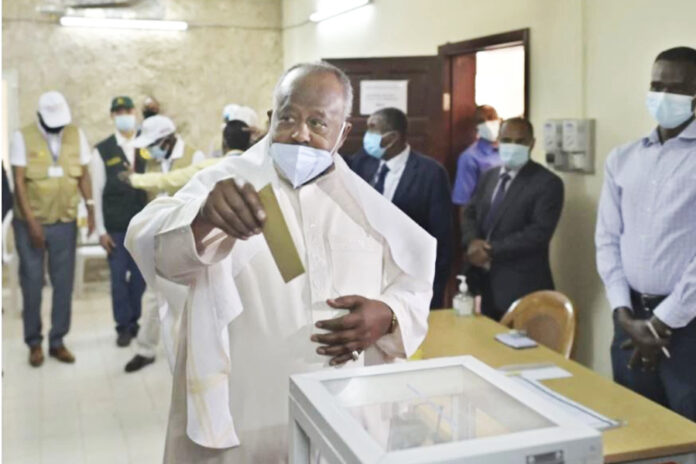 Djibouti’s Ismail Omar Guelleh was re-elected for a fifth term as president with more than 98 percent of the vote, according to provisional results announced early on Saturday April 10.
About 215,000 citizens were registered to vote in the ballot pitting Ismail Omar Guelleh, 73, against a businessman and a political newcomer Zakaria Ismail Farah.
Counting started shortly after polling stations closed on Friday April 9, in the Horn of Africa nation, which overlooks one of the world’s busiest trade routes at the crossroads between Africa and the Arabian Peninsula.
“President Ismail Omar Guelleh obtained 167,535 votes, which is 98.58 percent,” Interior Minister Moumin Ahmed Cheick told public broadcaster RTD early on Saturday, adding that confirmed results would be released soon by the Constitutional Council.
Independent election observers said the process went smoothly, with no reports of misconduct.
In a social media post early on Saturday, Ismail Omar Guelleh wrote, “Thank you for your trust, thank you for Djibouti! Together, let’s continue!”
Earlier, after voting in the capital where most of Djibouti’s one million people reside, Guelleh praised the trouble-free conduct of the electoral exercise.
Dressed in immaculate white traditional robes, he said he was “very, very confident” of victory, after placing his vote in a transparent ballot box.
Zakaria Ismail Farah, a 56-year-old cleaning products importer, ended up with less than 5,000 votes, according to the provisional results.
Ahmed Tidiane Souare, the head of an African Union (AU) observer mission, said all candidates were free to send their officials to any polling station.
Zakaria Ismail Farah, who had styled himself as the “flag bearer of poor Djiboutians”, had alleged unfair treatment during the election campaign, including that he was not provided security at his rallies.