The national council for the coordination of public participation for the construction of Grand Ethiopian Renaissance Dam has asked Ethio telecom for the prolongation of the third round of fundraising drive to support the construction of the mega hydro dam.
On Thursday April 22, 2021 Ethio telecom handed over 122.5 million birr to the Ethiopian Electric Power which was collected through the 8100 short SMS to support the construction of the great Ethiopian renaissance dam.
Through its third-round fundraising Ethio telecom has collected 122,467,676 birr within one year starting from March 2020 up to March 2021 through short SMS from its customers.
A remarkable aspect of the project is that it is 100 percent funded locally, through the platform that Ethio telecom provided via the 8100 short SMS for three rounds starting from August 2014-March 2015 (first round), from October 2015 to April 2016 (second round) and the last round from March 2020 to March 2021. 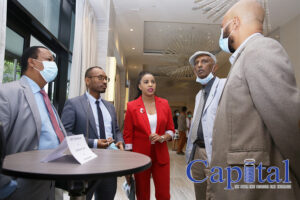 In its three rounds Ethio telecom has collected more than 252 million birr of which 80 million was in the first round, 49 million in the second and the rest in the third round.
The Grand Ethiopian Renaissance Dam (GERD), is around 70% complete and is expected to need 5 billion dollars to be completed and promises to provide much-needed electricity for Ethiopia’s 105 million people.
Even critics of the Ethiopian government have the same stand with the government when it comes to Ethiopia’s Grand Renaissance Dam, which is a testifying factor to its importance.
The CEO of the telecom company, Freihiwot Tamiru, gave the cheque to Ashebir Balcha, CEO of the state-run EEP, and head of the Grand Ethiopian Renaissance Dam (GERD) project.
Of course, this initiative was as a lack of international finance for projects on the Blue Nile River due to Egypt’s alleged persistent campaign to maintain presumed hegemony on the Nile water share which then forced Ethiopia to finance the project from within.
“Since the beginning of the construction, Ethiopians have contributed a total of 15 billion birr via various ways including buying Dam bonds and direct support,” said Aregawi Berhe, head of the National Council for the coordination of public participation for the construction of GERD, adding, “Since the construction is fully funded by the locals it is a reflection of our independency and sovereignty.”
Aragawi also said Ethio Telecom has accepted his office’s request for the continuation of the fundraising campaign via SMS-8100 for the next six-month.