Hijra bank, one of the latest banks to join the ever growing banking sector has inaugurated its own building and first headquarter on Wednesday April 28, 2021. Similarly, the bank has planned to raise its capital to 5 billion birr within 4 to 5 year time.
After receiving green light from the National Bank of Ethiopia (NBE) Issued on September 14, 2020 to the founding board of directors of Hijra, the second under establishment, full-fledged interest-free bank in the country started its activity to start its operation according to Mukemil Betru, Board Chairperson of the bank.
By way of 130 million birr finance, Hijra bought its first building located at Bole around Denbel city center. According to Mukemil the 9 story building will be the headquarter of the bank.
Moreover to accelerate its operation the bank has floated an international bid to link core banking software and connect the same to its branches. 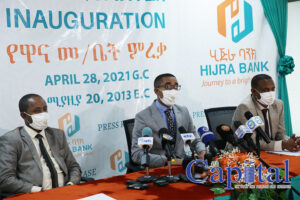 “We have floated a bid and we have thus far five shortlisted international suppliers. Now we are in the process of identifying the winner after which we will start operation,” said Mukemil.
“Hijra Bank is not only for the Muslim society but also for all who need interest free banking services,” said Dawit Kenno, the newly appointed acting CEO of Hijra.
Hijra officially started selling shares on July 22, 2019, after getting the pre-formation licenses from the regulatory bank on June 20, 2019. Initiated by nine individuals, the Bank sold shares through 12 banks, having a par value of 1,000 Br, a maximum of 20,000 and a minimum of 30 shares were offered for public subscription.
After finishing its share sale within three months, the bank managed to raise 700 million Br in paid-up capital from over 9,000 shareholders that subscribed to 1.2 million shares.
The bank plans to become operational within two months, and it further aims to make fully operational its dozens of branches with in the coming four months, according to the board chairperson.
However, after Prime Minister Abiy Ahmed (PhD) came to power, the administration expressed its commitment in allowing the formation of Islamic banking by issuing a directive that enables banks to offer interest-free banking services exclusively. Zam-Zam Bank, the pioneer in attempting to establish a full-fledged interest-free bank in the country over a decade ago, was the first to start the processed of forming a bank in the current round.
Recently, the National Bank of Ethiopia (NBE) has issued a directive to new entrants to the banking industry to increase their paid-up capital to five billion birr within seven years. As Muklemil maintained, Hijra, will increase its capital and rise past the threshold to reach 5 billion birr with 4 to 5 years’ time.