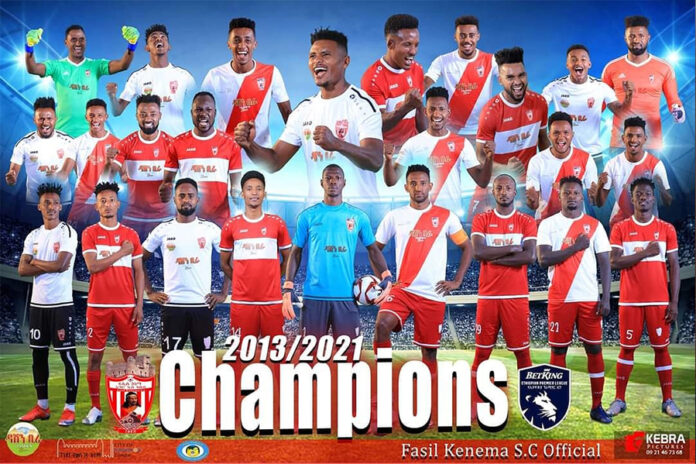 Fasil Ketema broke new ground lifting Ethiopian Premier League championship title for the first time in the club’s history. With second place Ethiopia Bunna held to a goalless draw against Wolayta Dicha, Fasil claimed the coveted trophy for the first time in the clubs history having four fixtures remaining. “This is a historic day for all Fasil supporters and a new dawn for the region’s football,” remarked Coach Seyoum Kebede the mastermind of the new order.
Though unconvincing early at the season start, Seyoum managed to turn the tide in inspiring his squad thus steering “The Emperors” for their first ever championship title with flying colors. Fifteen wins, four draws and a single defeat, nothing to comment on the team except hailing them the deserved champions.
The richest side in the country in command of the only foreign Coach in its roaster commanding the best of local talents along with four imports St George and popular side under much talked about Coach Kassaye Arage Ethiopia Bunna were considered favorites at the start of the season. But in vain to miss the title in the last two seasons Fasil stood firm and the strongest adversary of the season making history as the first side to collect League Committee one Million Birr money prize.
Boasting the best goalkeeper as well a formidable defense line that conceded only 21 goals, the hard working and well-orchestrated mid field spearheaded by merciless strikers, Fasil won the title collecting 49 points with four fixtures to go.
This is the second premier league title the first some ten years back at St George where he served as a player as well junior team Coach. Whatever the case leading Fasil Ketema to its first ever title in such high inspiration and consistency it is a dream come true to Seyoum who also served as assistant to Sewnet Bishaw to return Ethiopia into Nations Cup final after three decades.