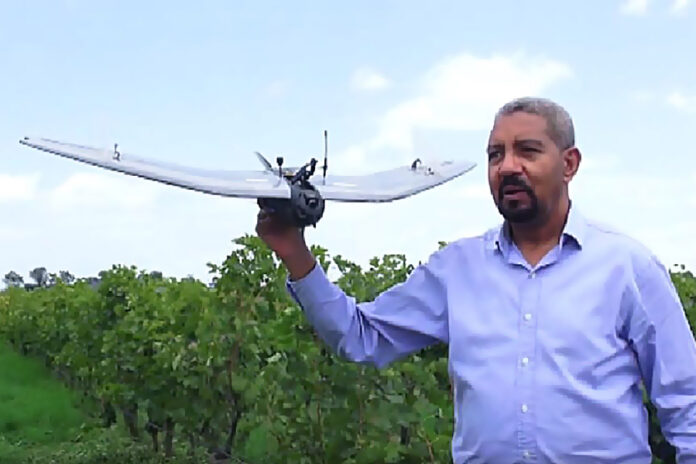 BGI Ethiopia, castle winery introduces Africa’s first drone technology to protect its wine yard from birds’ attacks. The company imported four falcon birds trained in crop protection and deployed them on a vineyard in its wine yard at Zeway 163 KM from the capital.
BGI produce 202 hectares of wine on total of 247 hectares of land. There are 10 varieties of grapes used for white and red wine brewing in this vast farm.
“Efforts have been made to prevent bird attacks on vineyards and other traditional methods, but no lasting solution has been found,” said Yetbarek Girma farm manager at Castle winery. “When the birds eat a bunch of grapes, they are creating fungi and ruining the wine’s production and quality, affecting the fermentation process,” he added. In recent years, especially in Kenya and Tanzania, due to dry weather, many grapevines have been attacked in the vineyards. As Yetbarek explained during last year’s production season, 25 percent of production was affected by bird attack.
“We have imported four species of birds trained to prevent damage to the vineyard and a modern man-made drone to protect the farm from this attack,” said Yetbarek.
BGI has been using this method for the last two months and we were able to harvest quality wines by protecting the yard from attack by keeping the birds in the air for long periods of time.
“We have confirmed that imported birds and drones have no effect on the country’s birds from the respective governmental office. Studies also back this effective and safe procedure of using artificial birds to isolate birds in high-income agricultural areas,” says Gebresilase Sifer, Head of public relation and communication of BGI Ethiopia.
The Castel Wine Factory, the third largest in the world and the second in Africa, is located in Zeway, 163 km from Addis Ababa. Castel is currently marketing more than a dozen unique flavors and types of wines. Castle has won three gold medals at the 2020 World Wine Festival.