One of the critical challenges related with the fast growth of urbanization is access to water that is seen in almost every city and town in Ethiopia, whether they are old, established or emerging and newly formed towns.
To meet the fast growing demand of tap water supply the government is trying its best, while the effort is also supported by international partners like the World Bank and African Development Bank to fill the gap.
Besides the effort of the government the role of the private sector to support the community is crucial. A good example is the effort of Apex PLC. The company that started climate friendly manufacturing industry about 17 years ago at Gelan, an industry town some 28km south east of Addis Ababa in Oromia region, has been engaged on corporate social responsibility (CSR) since its inception.

Atnafu Demelash, a dweller of Gelan town for more than two decades, which was recently formed as city administration, recalled the situation that began 17 years ago.
He said that at the time he used to run a restaurant for travellers and others who were working on different projects like Apex industry in the locality.
“We were supposed to go very far to get water for our business and daily life use since there is no formal water supply in the area,” he reminds, adding, “when Apex, which is the first industry for the area, started its operation it had drilled a well for its production purpose and at the same time we, the residents of the town and the community nearby rural areas, who used to fetch water from a pond, have got a chance to use tap water for free.”

He said that the contribution of the factory is beyond expression.
“We understood the support that the factory provides when technical failure stops the water supply for two days. We have been forced to transport water from Bishoftu and Akaki towns when the technical failure interrupts the water supply for few days,” he explained.
“Besides accessing the water for drinking and cooking, I shall confidently say that the town has been built by the water that we are fetching from the line that the company installed at its gate from the drilled well that is on the backyard of its factory compound,” the resident, who also constructed a five storey building by using water from Apex at his previous restaurant area for lease and other purposes, stated giving his tribute.
“If you knew this town about a decade ago it was empty except some residents living at the hill, however, it is now fully packed by resident houses, new constructions and industries. We all in the town access the water provided by the private company for free for our construction,” Atnafu added.
The 75 years old Abebe Demise, former police commission machinery mechanic and resident of Gelan since mid-1960s said that the town residents have been traveling approximately 6 km to reach to the pond, commonly known as Gara Kushu, to access their water. 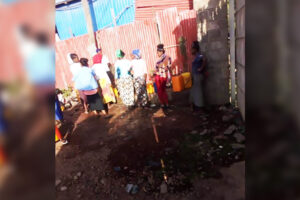 He explained that until the first factory came and start serving the community on clean water supply they were supposed to go over 8km to Akaki to get a tap water.
“Sisay Shekour, owner of the company, has eased our problems,” Abebe appreciates the effort of the owner, “meanwhile currently the town administration is providing tap water for residents, Apex never suspend providing the water for those who need.”

During Capital’s visit at Gelan, the town resident expressed their love for Sisay Shekour who is an icon and a pioneer for others to engage in similar CSR projects.

“He is a benchmark for other initiatives that others follow in helping the community, now we can say that several companies in the town that are providing support for the community in different forms copied the work of Sisay,” they said.

“We don’t want to stop providing the water, even though the administration starts to provide,” Yared Dagnew, General Manager of the Apex said.
“As per the order of the owner of the company, we continued providing the water 24 hours a day and that anyone can fetch anytime during day or night,” Yared, who started working at the factory from the inception, 17 years ago as production manager climbing up the ladder to become General Manager.
“At the area we are the pioneer as a factory but now the number of factories is estimated over 360. We are a good example for others who are investing in the area,” he added.
Yared said that despite several industries started providing the water for the community, currently only very few of them remain on the initiatives because to the handling of the tap water is not easy.

“On the water production process there are costs and it has hassles to manage the day to day operation and due to that most of them are unable to continue,” he explained.
Yared added that there is also another reason why the company wants to continue serving the community on providing the water.
He said that besides direct users, youths in the town are also made the initiative as a source of income for themselves and their families.

“As a pioneer Sisay has provided a lesson for other private actors to do their part beyond generating profit,” the General Manager shared what he evaluated in the area.

The General Manger said that there are several youths who fetch the water and transport it via handmade wooden trolley cart or on the back of donkeys.
One of the youths is Demelash Deju, who was two years old when this factory started operation 17 years ago. “I am 19 years old,” he says, “our elder brothers used to fetch the water from the factory and sell it in different places around the town.”
About three years ago he and other youth in the town replaced their bigger brothers and uses the system as a source of income.
Demelash, a 9th grade student, said that the income he generated from water sales supported himself to buy different needs like cloth, handbook and other educational materials.

“At least I earn 100 birr per day that covers all my costs and also allows me to support my mother, who is a cleaner at one of the industries in the town,” he told Capital.
Abebe told Capital that the community has built a good rapport with Apex, who not only engage on CSR but creates sustainable jobs for the youth in the area.
“For instance, when a fire accident occurred a couple of years ago at one of the warehouses in the compound of the factory, I saw the community responding instantly from children to elders, men to women in the town immediately arrived on the area and were involved collaboratively to control the fire within a very short time before it damaged properties,” Abebe, who has now joined the factory through his profession as a machinery mechanic after retiring from the police commission, explained.
The General Manager recalled the day as he expressed his emotion when he saw the zeal of the community when the fire accident occurred at the area, “the accident had occurred on a Sunday, which is not a working day. Even I arrived at the area late, but I saw the passion of the community, which was admired by all of us, the company owners and leadership alike.”

Currently, Apex which is the only pencil and cash register machine paper factory in the country, accommodates 180 employees and from that 97 percent are women.
Apex pencil that is called Dot is highly accepted on the market for its quality. Besides that, it is known for contributing for novel concepts of keeping forests from deforestation unlike other conventional pencil production schemes.
“The production process is environmentally friendly since it is using scrap papers like newspapers as an input,” a person, who served at the production line told Capital, expounding, “we are recycling paper that are collected from all over the country that also creates job for several youth who are engaged on the collection.”
Officials at Gelan Town Water Supply and Sewerage Enterprise said that companies like Apex are playing significant role to narrow the gap on the water supply.
They told Capital that water shortage is common in Gelan as similar as other towns in the country. “There are areas that get water for hours every four days from the pipe system and there are also areas getting for less than one hour every one week,” one of the experts at the enterprise told Capital.
The enterprise is providing water from the well that was drilled at the southern outskirt of the town through pipe system.
Currently, the enterprise’s water production is 46 meter cube per second, while the demand is more than 100 meter cube. 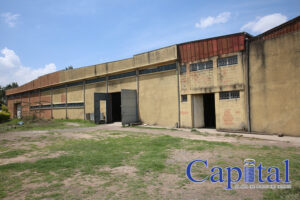 “The supply and actual demand of water in the town does not meet but that is narrowed by the initiative of private companies who have wells in their compound,” the enterprise, which has about 8,000 customers said, explaining that, “as a pioneer, Apex has provided water for the community that attracts others like Kospi, Warka, Atlas Resort and others, who followed the practice of the pioneer.”
They said that with the contribution of private companies the current water coverage in the town is estimated to be about 70 percent.
Nigusu Bedada, Communication Bureau Head of Gelan, said that the residents are growing rapidly and are now estimated to be about 100,000.
He accepted that the water shortage was one of the challenges for the town. “Although we provide water for the town, it is far from meeting the demand, while we have projects that we may improve the water supply,” he added.
Currently, the Addis Ababa Water and Sewerage Authority have been carrying out a project to generate 80 meter cube water from the well around Gelan area that the small industrial town hopes to get some portion.

Nigusu said that the support of private companies residing in the town is highly appreciated, “Although CSR is expected to be undertaken by the private sector the initiatives of companies in the town to ease the water shortage burden and other social challenges is significant and others should follow suit.”
“We encourage, support and recognize the companies who are narrowing the gap on social problems in the town,” he explained.
Sisay, owner of the pioneer pencil and cash machine paper factory, said that through its different companies it played its CSR in different part of the country in different social supports like regular and direct support or constructing different centers like schools. “The initiative that we carry out at Gelan is one of our contributions that will strongly continue in the future,” he told Capital.

“We believe in a mutual benefit and sharing the burden of the community anywhere else that we operate,” Sisay expressed his viewpoint, “our relation with residents in Gelan is in good hand from the initiation because not only for CSR but we are ready for any partnership and social engagement.”

Sisay reminded that he saw the community’s response when an accident occurred at his factory few years ago.