Zemi Yenus, a special African Voice who dedicated her life to fight for Ethiopian children with autism and related disorders has passed away on Monday May 11, 2021 late mid night due to COVID 19. Zemi was the founder and director of Nia foundation, which was a joy autism center founded to reduce and support children with autism who were neglected, forgotten and left in the dark. Her foundation now supports and takes care of over 80 children.
Zemi was born and raised in Addis Ababa. She left Ethiopia during the Red Terror, a time of violent political unrest in the late 1970s and went to Italy at age 17. At age 19, she started working for a Refugee Service Agency called UCEI that worked alongside with the United Nations High Commission for Refugees. As part of her work, she was in charge of migrant’s entry to the U.S.A. After completing a course in Cosmetology, she worked in several places in California, including in Hollywood and Beverly Hills and established her own beauty salon in Los Angeles. 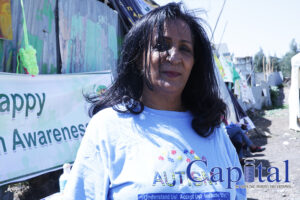 In 1992, soon after the Military Regime changed, Zemi returned to Ethiopia to make it up for her country by doing everything possible to change situations with a special concern for young girls. On her return to Ethiopia, she opened ‘Niana School of Beauty and Modeling’, the first licensed professional beauty and modeling school in the country.
In the meantime, she was facing enormous challenges because her son was continuously expelled from schools because of his autism. He was viewed as spoiled and undisciplined. She tried several schools for her son, hoping to find one that could meet his needs. Finding no schools equipped to deal with children in the Autism Spectrum Disorder in Ethiopia where many children with Autism were considered cursed and possessed and, were chained and locked away in dark rooms, she had to decide whether to go back to the United States, where such schools existed, or stay in Ethiopia. Through these trying times she learned about other parents’ challenges in raising their children with autism.
Particularly, she found out that mothers were blamed for their children’s’ condition. Determined to end the stigma, exclusion and physical confinement that afflicted autistic youngsters, Zemi decided to stay in Ethiopia and made her life’s purpose to aware the public about autism and to change the lives of parents and children with autism and other Intellectual disorders.
She began autism awareness creation program by including the issue in the modern and traditional beauty services and products exhibitions she organized. When it became clear that creating awareness was not enough by itself, in May 2002 she opened the first autism center, using funds from her Niana School of Beauty and Modeling.
She used to say that one of her best achievement is also the personal and organizational advocacy efforts she exerted that resulted in better inclusion of ‘Autism’ in the government policies, plans and guidelines.
Zemi has been building a new autism center that can accommodate 500 Ethiopian children with autism and related developmental disorders in Ethiopia on 5,000 hectares of land with a capital of 250 million Birr. A world class autism center of excellence for the purpose of conducting operational researches, providing holistic therapies and specialized education for children autism and related disorders was what she envisioned in addition to seeing mothers smiling as opposed of feeling ashamed of their children from the ridicule that society brings forth.
Unfortunately, COVID-19 blocked her from realizing her dream. As learnt from the eulogy read on her funeral ceremony, the director was infected by the Coronavirus and had been treated in one of the COVID Treatment centers in the capital, Addis Ababa.