EthSwitch, a national switch, and Somali Microfinance Institution (SMFI) sealed a deal to include SMFI as the first micro financial firm to join EthSwitch as an indirect participant. The national payment solution is also introducing a national payment gateway.
EthSwitch which is the owner of Ethiopay, a domestic card scheme developed for all banks in Ethiopia to issue and acquire payment cards, has been working with all local banks for the last decade, while the coming of SMFI would be a new era for both the microfinance firm and the technology provider.
The statement that EthSwitch issued indicated that the participation enables Somali MFI to make its mobile wallet system interoperable with existing and upcoming payment systems allowing its customers to transfer funds to other financial institutions using their mobile wallet or accounts. 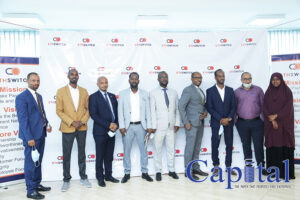 “The participation also enables Somali MFI to let its customers leverage payment acceptance devices deployed by banks and payment system operators across merchant locations,” it added.
So far banks are using the scheme on direct participation.
Yilebes Addis, CEO of EthSwitch, said that the e-payment solution is mainly undertaking three major goals including interoperability between financial firms, creating domestic payment scheme and infrastructure development for the use of financial firms.
“SMFI will benefit from the scheme that its customers shall easily issue cards to use payment terminals on banks and boost their existed mobile wallet service,” Yilebes explained.
Yilebes reminded that his company establishment targets to attain the national digital payments and financial inclusion strategies that banks, MFIs and as per the latest law payment system operators (ATM, POS, gateway, and switch operators) shall use it, “so it will ease the service of financial firms including the regional MFI.”
Khadar Ahmed, General Manager of SMFI, said that the institute is very strong regarding mobile money service and providing huge contribution for the society to ease the financial constrains.
“Switching our service with other financial firms will also expand the operation widely with positive accessibility for clients,” he said, adding, “The outreach for EthSwitch is also another contribution of the new deal.”
Including Somali MFI seven MFIs have bought share on EthSwitch, however, SMFI is the first to get approval from EthSwitch’s board of directors as an indirect participant after fulfilling the necessary requirements.
SMFI has bought the allocated 1035 shares of which 60 percent is paid. Through mobile transfer SMFI is facilitates 200 million birr daily transaction.
The membership also enables the microfinance institution to issue payment cards to its customers, which they can use on all of ATM and POS terminals.
Khadar told Capital that his institution is under preparation to issue cards to use the advantage and provide alternative for customers. 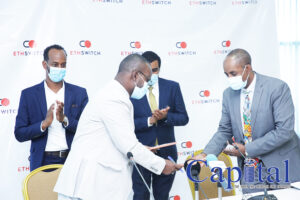 “We are the leader on the number of transaction under mobile money in the country and using cards is also more opportunity on the modern payment system,” he added.
“Under the piloting peer to peer (P2P) the microfinance will benefit more,” Yilebes explained. He explained that P2P is the new scheme which is under pilot stage is enable financial firms to transfer or pay money between each other’s besides the current service of using ATM and POS.
“An individual that have account on bank A shall pay for another person who have account on bank B without further process,” he explains about the new service “we have got positive results under the piloting and fully introduce in the coming financial year.”
For over five years EthSwitch has enabled to manage all ATMs under interoperable, and since last year using POS terminals operated by all banks.
Ethswitch, established in 2011, is a share company fully owned by all banks in Ethiopia. It is established mainly to provide simple, affordable, secured, and efficient e-payment infrastructure services to retail payment service providers, and through them, to end users in Ethiopia; by deploying technology.
Ethswitch is one of the two national switches in Africa that Yilebes says it has enable to cut unnecessary charges that may be occurred if the country uses foreign payment systems for its domestic payment solution.
The CEO explained that over 26.5 million numbers of transactions that have 28 percent increment compared with the preceding year have registered, while ATM cash withdrawal takes the 80 percent.
“POS interoperable has registered significant performance despite being new. In terms of profit it achieved 115 percent compared with the projection,” he added.
The CEO told Capital that it is on process and to some extent has tested to introduce a national and international payment gateway. The new scheme is targeted to facilitate payment through online for ecommerce transaction.
“We will provide a service for online payment gateway service providers not for customer or merchant,” he says “we are under implementation negotiation stage that would be available in the market to the maximum in six months, but if payment gateway licensed companies shall come in the short period we may commence the operation lesser than the given period.”
EthSwitch subscribed capital is 900 million birr. It is expected to handle payment system operators and payment instrument issuers when they are getting a green light from NBE.
So far information indicated that about 12 system operators and four issuers are on the pipeline to be operational as per the NBE directive that was issued recently under the way to financial inclusion and digital payment strategy.