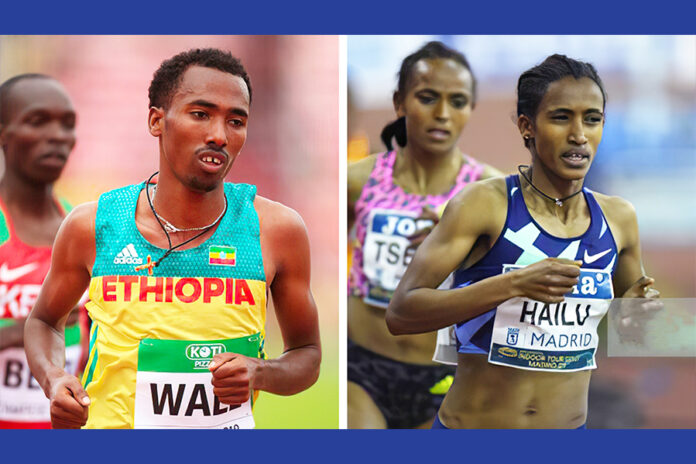 Getenet Wale coasted to victory in the men’s 3000m steeplechase running all alone for the latter half of the race and winning by 11 seconds. His compatriot Ethiopian Freweyni Hailu was a class apart in the women’s 1500m, clocking 4:04.20 to win from Slovenia’s Marusa Mismas-Zrimsek.
Though pre race hot favorite Ethiopian Genezebe Dibaba take the lead from start through 800 in 2:11 and the field remained close until the final lap. But once the bell gone, Genezebe surrendered the lead to her compatriot Hirut Meshesha. When things appeared to go Hirut’s way little known Freweini burst from behind to go all the way to the finishing line.
Freweyni Hailu pulled away to win comfortably in the end in 4:04.20, taking almost two seconds off her 4:05.91 pb from last year and hitting the Olympic standard on the nose. Dibaba, meanwhile, totally ran out of gas after she was passed and wound up dropping out of the race on the final lap.
As the only man in the field to have run faster than 8:12, 2019 Diamond League champ Getnet Wale of Ethiopia (8:05 pb), who ran 7:24 for the flat 3k indoors, was the heavy favorite and backed up that status, getting out to an early lead and running most of the race on his own to win in a world-leading 8:09.47.
The real drama came behind him, as four Europeans Great Britain’s Phil Norman (8:20.12), Italy’s Osama Zoghlami (8:20.29), Spain’s Daniel Arce (8:21.53), and Italy’s Ahmed Abdelwahed (8:21.54) were all able to hit the 8:22.00 Olympic standard. It was particularly important for Norman and Abdelwahed, neither of whom had the standard going in.