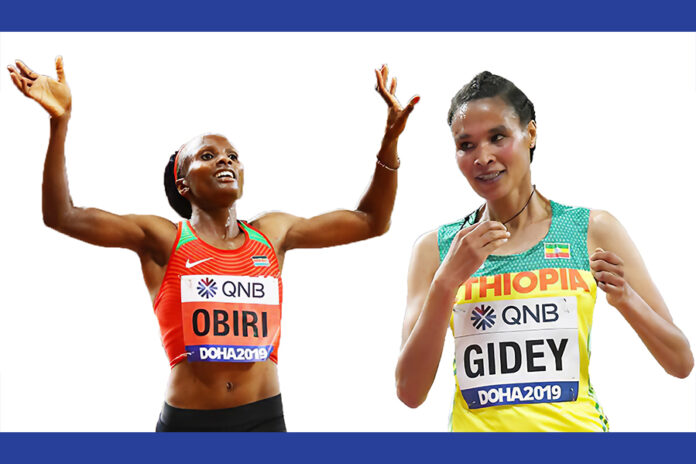 World 5,000m record holder Letesenbet Gidey of Ethiopia will face off with two-time world 5000m champion Helen Obiri over 3,000m at the Doha Diamond League slated for next Friday May 28.
It will be the first clash between the pair since Obiri defeated Letesenbet over 5,000m at the 2020 Monaco Diamond League.
Obiri, the world cross-country champion set a Kenyan 3,000m record of 8:20.68 in Doha in 2014, and also won over the same distance at the Doha Diamond League in 2019 and 2020.
Gidey smashed the world 5,000m record in Valencia last year, clocking 14:06.62 and although Obiri leads their career head-to-head record at 9-5, Gidey has finished ahead of Obiri twice in Doha: at the 2018 Diamond League meeting and at the 2019 World Championships over 10,000m.
It will be the first track appearance this season for Obiri who made her debut over half marathon last month in Istanbul.
Obiri, who is aiming for her maiden Olympic gold medal said she is using the series in her preparations for the Summer Games.
Similarly, Gidey who will be making her first appearance since smashing the world record said she is also seeking to build momentum ahead of the Olympics.
It is recalled that the 22 year-old Letesenbet easily beat the previous record held by compatriot Trunesh Dibaba in Oslo in 2018. The Doha meeting is the second leg of the 2021 Diamond League season which is set to kick off on May 23 in Gateshead, England.