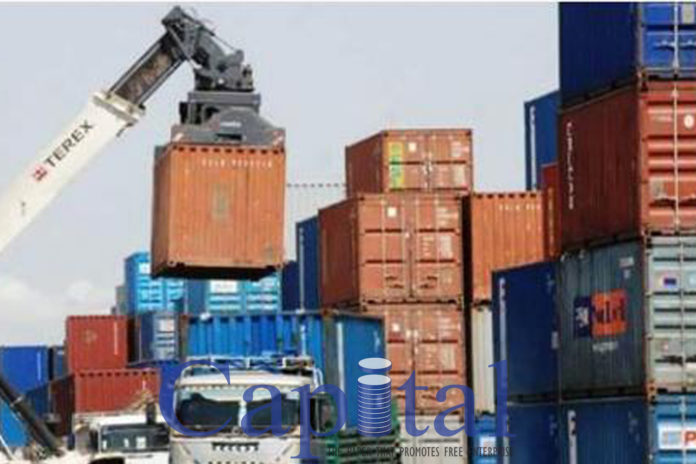 Ethiopian Shipping and Logistics Services Enterprise (ESLSE) says the effect of global box shortage is scrambling its operation from time to time. Container freight rates price spikes by triple.
Recently, Capital reported that in relation with the global pandemic, COVID 19, economic slowdown had engulfed the logistics sector. Moreover, containers being stranded in different destination globally fueled to the fire as it created shortage for operators including ESLSE. Amid this event, Roba Megersa, CEO of ESLSE, told Capital this week that the effect has become severe from time to time.
He said that the activity of ESLSE, which had registered marvelous performance on container handling in the recent past, has significantly slowdown. “We used to be delivering containerized cargos effectively but clients and our operations are now affected by the shortage.”
The international business that mainly derives from maritime sector is becoming critical in related with mismatch on demand and supply. International reports indicated that there is no sign of easing of freight rates as demand exceeds available slots and containers.
The export from China and Far East has increased by all actors including the western world thus the heavy congestion has occurred on Chinese ports.
“Ports and shipping operators are using it as a lucrative advantage to impose huge amount of additional sum on the logistics operation,” Roba complained.
The rate of shipping for containerized cargo has tripled, “such kind of increment has never been seen in the industry.”
Ports have also increased the port service fee on the reason for additional costs for the deployment system and resource, and over time fee for labour to mobilize the congestion. But the increment rate is not like shipping.
International experts on the maritime business said that terminals cannot run at full capacity, yet they have to deal with record volumes.
“Currently, the export of US and others in the region has dropped significantly due to that access to container has directly affected the industry including mainly our business,” the CEO said.
The containerized export of US and Latin America is on its 40 percent from the actual performance due to this effect those containers that entered in the stated region have stuck.
The global average usage time for containers had risen from 49 days to 58 days in related with the impact on container availability.
“The trade imbalance on the economic giants, China that is now on manufacturing port export boom and the US, has directly created an entire mess on the sector,” he showed the entire linkage effect on his enterprise operation.
According to Roba, carriers that have contract with ESLSE under its tender for six months are now unable to lift cargos because of the extraordinary price.
“The latest rate is not profitable for shippers due to that they are running for their own businesses,” he said. Carriers that ESLSE has hired under every six month tender scheme manage 80 percent of its cargos, while the remainder is covered by ESLSE’s vessels.
“Carriers like PIL, who were unable to penetrate the Ethiopian market because of their untrustworthiness, have now got the opportunity to enter the market. These carriers are lifting cargos on exaggerated price of up to USD 10,000 per forty feet container and over USD 5,000 for TUE that ESLSE is charging one third of the stated rates.
“These kind of shippers are sabotaging us in different tactics like refusing to provides slots and move cargos that we gave waivers,” he explained.
He argued that ESLSE is giving waivers for the sake of keeping the logistics sector to be active, “ we cannot stop the waivers because the letter of credit (LC) of clients shall be expired if cargos delays. On the other hand if customers want to extend their LC they have to pay huge sums in foreign currency. Due to that we give waivers.”
Experts said the waiver consignment rate that is managed by carriers like unreliable ones is much exaggerated and costs the country and clients.
Under the waiver scheme clients receive their cargos at Djibouti, while ESLSE on its multimodal operation provides value added service like delivering the cargos at its dry port or customer’s warehouse.
“Because of the situation our performance has cupped on 60 percent. We had targeted to manage 18,000 containers per month that is now stuck on 11, 000,” the CEO shows the effects in figures.
Unlike the previous trend the containership calls at Djibouti, which registered biggest recognition on container handling by the World Bank latest report, has declined by 20 percent due to the stated global situation. He said that container handling at the port is about 40 percent from its capacity.
Experts said customers including projects, which were on good execution in Addis Ababa and elsewhere in the country that ESLSE gave waivers, are delayed because of working with untrustworthy carriers.
Lloyd’s List latest report indicated that there is little chance of congestion in the supply chain being resolved before the fourth quarter of the year.