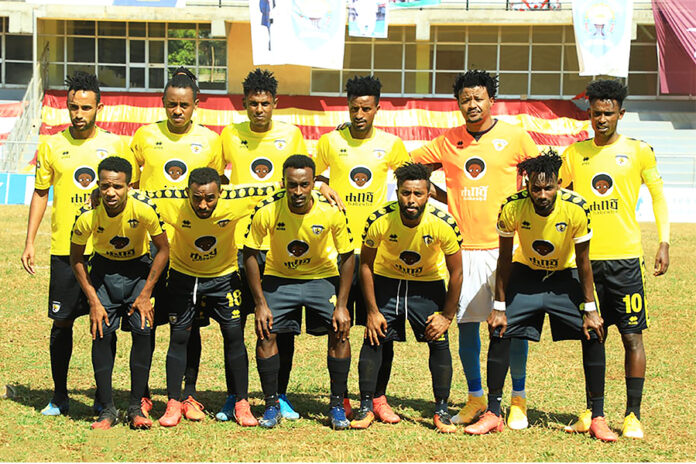 Runners up spot at the end of the premier league season, Ethiopia Bunna booked a place at next year’s CAF Cup qualifications. Wolkite Ketema’s brief stay at the top tier ended in misery.
Two years into his four years contract Head Coach Kassaye Arage helped his side to finish second in the table with fourteen points behind champions Fasil Ketema thus a place in next year’s African Confederation Cup.
Although luck of consistency and defensive blunder turned out a major problem throughout the season, thanks to loan striker Abubaker Naser’s incredible effort Bunna managed to secure the runner up spot ahead of historic rival St George with equal points but in goal differences. Finishing second without any foreign player in the squad is what the biggest credit is for the club as well as Kassaye.
The only other side with no foreign footballer Wolkite Ketema followed Jimma AbaJifar and Adama Ketema into relegation. With Coach Degarege Yizaw running away from the battle front due to a medical case and a new boss Sisay Abreha taking the reign, Wolkite hardly came functional, collecting just a mere 23 points from 22 matches.
Though Wolkite was mid-table with 16 points from four wins and four draws at the end of the mid-season break, things turned sour in the second round bagging only six points from a single win and three draws. Ardent Wolkite supporters disclosed that no one from the club officials is willing to give clarification why their team bottled out of the top league despite a readymade financial support is at hand.
Bunna, finishing runner up with no one foreign footballers in the squad is a big achievement. Ethiopia Bunna is the only side next to Wolkite Ketema with no foreign footballer in the squad.
Though it is mission accomplished to Kassaye who promised to at least finish runner up in his second season with the club, the major coup is that of dominating the season without any foreign players. Considering relegated sides that boast five or four foreign imports like Adama and AbaJifar respectively, Ethiopia Bunna disproved deserves a huge appreciation relegated finishing bottom of the table.