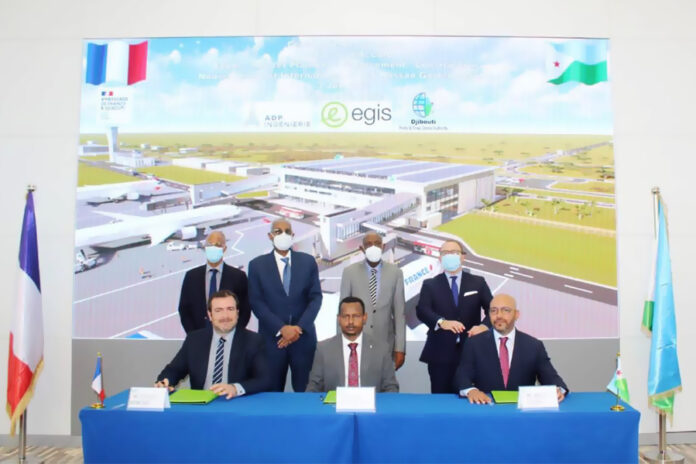 Djibouti Port and Free Zone Authority (DPFZA), Paris Airport and Egis have signed a deal to come up with the realization of the highly anticipated Al Haj Hassan Gouled Aptidon International Airport that target to boost the logistics sector with full aspect.
On the ceremony held on Thursday June 3, a memorandum of understanding (MoU) of studies, blueprint, financing and construction of the new Al Haj Hassan Gouled Aptidon International Airport have been signed in the Djibouti Free Zone at PK 23, amongst the trio. 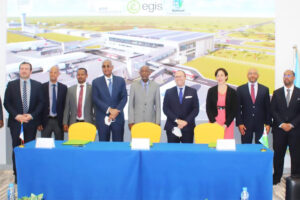 According to the announcement of DPFZA, the protocol follows the visit of Ismael Omar Guelleh, President of Djibouti; in Paris where both leaders including President Emmanuel macron have agreed that France will support the project of a new airport.
The studies and the elaboration of the airport master plan are financed by the Fund of Studies and Support to the Private Sector (FASEP) of the French Treasury Department.
Aboubakar Omar Hadi, President of DPFZA, said that the new facility is crucial for the expansion of the of the logistics sector on the new sphere, “the importance of this new airport in strengthening the multimodal chain in our country.”
The construction of this new International Airport is an important step in the strategy of creating transport synergy and will complement the missing link in the supply chain in Djibouti.
The airport will have a cargo terminal to serve as a basis for air-sea logistics and thus transform Djibouti into a strategic airport hub in the region.
On the signing ceremony, Hassan Houmed Ibrahim, Minister of Infrastructure and Equipment, and Arnaud Guillois, the French ambassador to Djibouti, accompanied by the Director of the French Development Agency Philippe Collignon as well as the representatives of French companies Paris Airport and EGIS were the attendees of the ceremony.
Hassan Gouled Aptidon International Airport is a planned new airport construction project that is located around Ali-Sabieh, which is the town on the corridor to Dire Dawa. 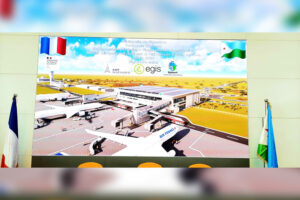