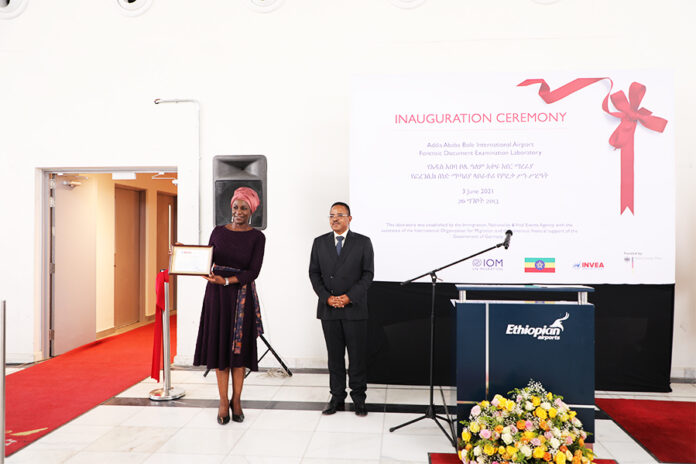 The International Organization for Migration (IOM), in collaboration with Ethiopia’s Immigration, Nationality and Vital Events Agency (INVEA), inaugurated Ethiopia’s first forensic document examination laboratory at Addis Ababa Bole International Airport on 3 June 2021.
An estimated 9,300 passengers pass through Bole Airport -the country’s largest port of entry-daily.
Equipped with state-of-the-art technology such as video spectral comparators, luminescent microscopes and light tables, the laboratory will help INVEA verify the authenticity of travel documents and improve fraud detection, thereby enhancing Ethiopia’s capacity to ensure the safe and orderly movement of people into its territory.
“As a signatory to the African Union free movement of persons protocol, the Continental Free Trade Area Agreement and of the free movement agenda of the Intergovernmental Authority on Development (IGAD), the Government of Ethiopia is committed to strengthening its border governance. The newly established forensic lab will go a long way in assuring physical border security and human security for the country’s citizens and other populations crossing its borders,” Mujib Jemal, Director General of INVEA, said.
The laboratory was set up with the financial support of the Government of Germany.
The Government of Germany is supporting IOM to strengthen Ethiopia’s immigration and border management capacity, including through the provision of infrastructure and equipment, specialized trainings for government officials, as well as improving Ethiopia’s immigration and border management governance framework. 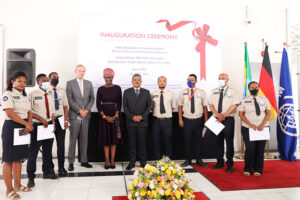 Ambassador Auer said, “The detection of counterfeit or improperly used identity documents is essential in the fight against crime and to enable effective border management. These in turn are crucial parts in strengthening the rule of law. Therefore, Germany is glad that through our support to IOM, INVEA at Bole International Airport is now equipped with modern technology for forensic investigations of documents in order to detect counterfeits, improve border control, and ultimately help to foster the rule of law.”
Prior to the inauguration, ten INVEA officers were trained on how to operate the newly installed equipment at Bole Airport. They will become INVEA’s fraud detection and document verification specialists and train their own workforce, supported by IOM’s Document Examination Laboratory Manual for the Immigration Environment and IOM’s Passport Examination Manual.
IOM’s Achieng underlined “that the need for the Government of Ethiopia to enhance its domestic capacities in border management by addressing migration governance gaps, developing material and human resource capacities, and fostering cross-border cooperation. The establishment of this forensic laboratory is a step in the direction of realizing these goals and of ensuring that all movement across Ethiopia’s borders takes on a safe, legal and humane form.”
The inauguration ceremony was attended by among others, Mujib Jemal, Director General of INVEA, Stephen Auer, German Ambassador to Ethiopia, Maureen Achieng, IOM Chief of Mission to Ethiopia and Representative to the African Union and United Nations Economic Commission for Africa, and Tewolde Gebremariam, Ethiopian Airlines Chief Executive Officer.