Addis Ababa Housing Development and Administration Bureau and Gojo Bridge Housing Trading plc signed a memorandum of understanding (MoU) to work together on the access to housing in the capital city.
Gojo Bridge Housing has introduced an alternative housing scheme that the dwellers shall access at reasonable rates with the support of financial firms and volunteers, who agreed to share their plots for the construction of high rise condos.
The city administration recently called residents, who registered on the housing scheme of 20/80 and 40/60 about 8 years ago, to form cooperatives and then to build their houses on the plot that the city administration shall facilitate in the city. However, the access to available space in the city is a challenge on meeting the new scheme that the city 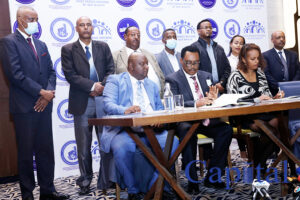 administration commenced; while the model of Gojo shall look forward to ease the issue since it has already enabled to amass huge plots in the town including at the downtown from residents under sharing plots for housing instrument.
Under the document disbursed on the signing ceremony, the MoU targets to solve the possible challenges on the new city scheme.
On the Gojo’s scheme, dwellers will construct their own house on their direct involvement. Under its model Gojo has planned to construct 100,000 houses in the coming five years.
Based on the MoU, those who registered at the city administration to construct their houses via cooperatives shall access the plots of land that are available at Gojo sharing scheme.
The new deal is stated as a good opportunity for dwellers that are registered under City Administration cooperative scheme to trust the initiative of Gojo, who has also already commenced registration for those who have deposited the required amount in order to get their own house on the new arrangement.
Under the MoU, the Housing Development and Administration Bureau will look after the process and projects when they are commenced.
Based on the MoU, Gojo will file a project progress report every month for the city Bureau until houses are transferred to builders. It is also responsible to facilitate access to credit. It has already signed agreements with financial institutions including the state giant Commercial Bank of Ethiopia to work together on the alternative housing project.
On its part the Bureau is responsible to take corrective measures for any errors and follow up project progresses.
Despite hundreds of thousands registering to access condo houses under the city housing program, the actual performance and the demand could not be run as per the expectation. Due to that the government is now coming up with new housing policies and approaches to narrow the huge rift. Under the ten year plan, the government has expected to see one million houses in the capital and additional three million in the country that shall be built in different schemes including foreign real estate developers, cooperatives, public private partnership modalities, joint venture, and other new alternatives. 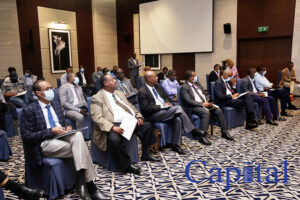 It was recalled that a couple weeks ago Capital reported that the Ministry of Urban Development and Construction (MoUDC) had revised the 16 years old housing policy and strategy to give more options for the private sector involvement on the housing scheme.
The amended strategy for affordable housing schemes that has been sent to the Council of Minister for ratification has expanded the alternatives to 12 from the previous 8 housing schemes.