The government ridicules the accusation that it is using starvation as a weapon of war. Government argues that it never took in to account the reality on the ground that is mainly covered by non-government bodies.
The government said most of the food supply is covered by humanitarian partners and it is confined only on the place of western part of Tigray.
On the latest briefing at the Office of the Prime Minister Mitiku Kassa, Commissioner for the National Disaster Risk Management Commission (NDRMC) said that is baseless accusation since the role of the government is loss regarding food supply.
“As long as 91 percent of the food distribution is covered by 5 nongovernmental partners; how can we imagine that we are using starvation using as a weapon of war,” he dismissed the allegation that is being circulated in different foreign media outlets, adding, “Had it been that the government controls the whole part of the region, we can imagine that, but the government of Ethiopia is only limited to 14 woredas in western part of Tigray which are in a conducive environment. Therefore, the pretext shall be corrected based on the reality.”
Before the question and answer session with journalists started, Mitiku had indicated that the government is only covering 8.7 percent of the food supply and distribution in the place of western part of Tigray and the remainder is covered by international and local partners.
On his update report Mitiku said that 4.5 million people in Tigray region were in humanitarian assistance in the first round and 5.2 million for the second and third round.
On the support, 170,700 thousand metric tons of food worth 5.4 billion birr has been distributed.
The food distribution was covered by government (70 percent) and the remainder by partners for the first two rounds. Since the third round six operators; World Food Programm (WFP), World Vision, Care International, Relief society of Tigray (REST), Food for Hungry (FH) and the government has been providing support.
Out of the 93 woredas (local districts) in the region; WFP covers 21 woredas (22.58 percent) in the north western and south zones, World Vision 7 woredas to eastern and south eastern zones, Care 6 woredas in central and eastern zones, REST 40 woredas (43 percent) central, north western, south eastern and south zones, FH 5 covers woredas in central zone, and the government covers 14 woredas (15.05 percent of the total area coverage of the region) in western area of the region.
Regarding food supply and distribution, WFP addressed 18.3 percent, World Vision 5.8 percent, Care 6.3 percent, REST 54.6 percent, FH 6 percent, and government 8.7 percent of the beneficiary. In general the five humanitarian partners covered 84 percent of the woredas and address 91.3 percent of the food supply and distribution, whereas the remainder is covered by the government.
“The role of the government is confined to monitoring and creating conducive environment for partners, and mainly focusing on the rehabilitation activities,” he said.
He added that on the beneficiary number, the report of humanitarian partners has been leased indicating that 5.2 million people or 90 percent of the population need immediate humanitarian assistance, “while we are looking into the breakdown of this number, we can observe that 1.01 million are productive safety net program beneficiaries and 40,336 are Eritrean refugees who are included on the two schemes that should not be included under the beneficiary list of humanitarian assistance.” 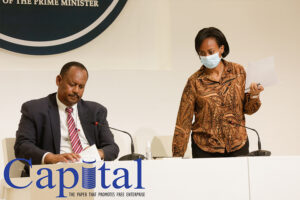 Regarding the non-food items, more than 98,500 emergency shelters and non food items kits that estimate 796 million birr has been supplied to cover more than 292,810 internally displaced people.
Mitiku said there is a significant gap in the non-food items which the partners cover only 33 percent.
Regarding to the coming agriculture season the supply of 322, 864 quintal of fertilizer from port of Djibouti and 214,864 quintal in carry over from last season has already made available and from the stated amount 210,795 quintal have distributed. 73, 440 quintal seeds have transported to the region.
With regards to the famine threat that similarly international media reported and global partners expressed their concern, the NDRMC head responded that there are criteria for the endanger of famine which have not transpired for the context in the region.
“There are at least three criteria that must happen to declare famine, while none of them are faced at the place. According to the standard, there is no incoming situation regarding the famine,” he ridiculed the concern.
He added that there is no food shortage because 91.3 percent of the beneficiaries have been provided by five operators, which are supported by USAID.
“The government is limited in the western part of the region. So they do have ample resource to address the needy ones in their areas of operation. Now the challenge is how to address the needy ones at the grass root level since there are sporadic gun fires every now and then. However, we are working with the regional administration to solve it,” he added.
He responded that the government is not in a position to declare famine currently in the Tigray region.
On his latest report that Mitiku gave on Wednesday June 9 the challenges like access and security issues that is related with sporadic firing in very few areas that need military escort to address the needy in the region, shortage of emergency shelter and non-food items, and supplementary food that is critical for children and lactating pregnant women have to be solved as soon as possible. He said the government is working with local supplementary food producers to provide the items and to buy from international market with partner.
On the day Billene Seyoum, Press Secretary for the Office of the Prime Minister, said that efforts have been embarked on the emergency recovery plan for Tigray.
She said that it is being developed by the government together with partners and will be lunched soon.
“It is in the pipeline in discussion with partners as well,” she says, “the response plan builds on existing successful whole-of-government approaches and aims to strengthen and scale up development and emergency programs, and community structures.”
Mitiku added that the recovery and rehabilitation intervention, Ministry Finance and Ministry of Peace are working with EU, the World Bank and UNDP in order to build back better the damaged and destroyed economic and social infrastructure in the region.
Schools in Mekelle have opened except only that they have been designate to host displaced persons. Likewise, others schools in different towns are also finalizing their process to commence their regular service.
Lia Tadesse (MD), Minister of Health said that the health facilities in the region are restoring, and she indicated that there are several progresses in the health system in the region.
She said 55 percent of the hospitals (22 out of 40) and 52 percent of the health centers (117 out of 227) in the region have currently been made functional and that a total of 52 percent of hospitals and health centers are functional.