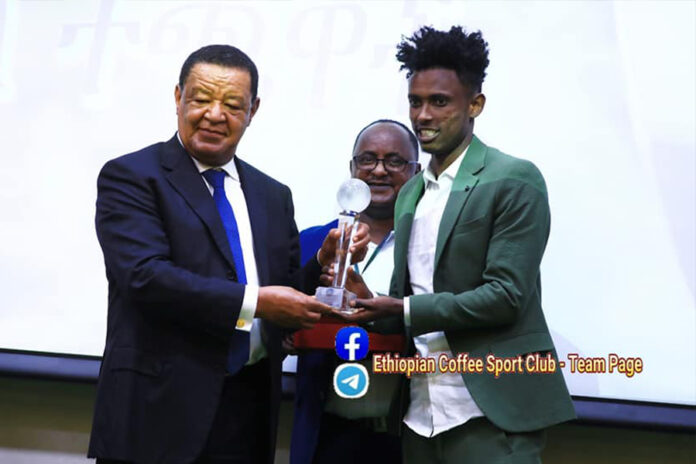 Ethiopia Bunna target man Abubeker Naser was handed a brand new automobile following his huge contribution in helping the club enter into international stage after nearly a decade. The club’s strongest sponsor Habesha Beer also gave away one million Birr prize money to be distributed among the players.
In the best ever award giving ceremony held at Sky Light Hotel in the presence of Ethiopian former President Mulatu Teshome and Mayor of Addis Ababa City Adanech Abebie, Ethiopia Bunna heralded that a new era is on the horizon for the club. “We are on the very right track to frog leap Ethiopia Bunna to the next stage” Board Chairman Fekade Mamo remarked at the reception. 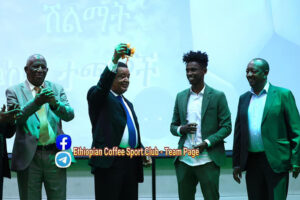 The event which saw the partner Habesha Beer gave recognition to a number of individuals who played significant role in the club’s success story this year. The magic player who swept off all awards of the league season: crushing the five year-old all-time highest scorer record, top scorer of the season bagging 29 goals in 22 matches and taking home the Player of the year accolade, Abubeker Naser was handed a brand new automobile that is worth 1.4 million Birr.
The club’s women side player of the Year Fekerete Hailu, Best Player of U20 and U17 teams Musse Kebela and Surafel Hailu respectively are among those who shared the prize money from Habesha Beer Golden Award. The special award was handed to Coach Kassaye Arage for steering the side to runner-up spot at the league season. The one million Birr prize money is to be distributed among players, coaching staff, administration employees and others.