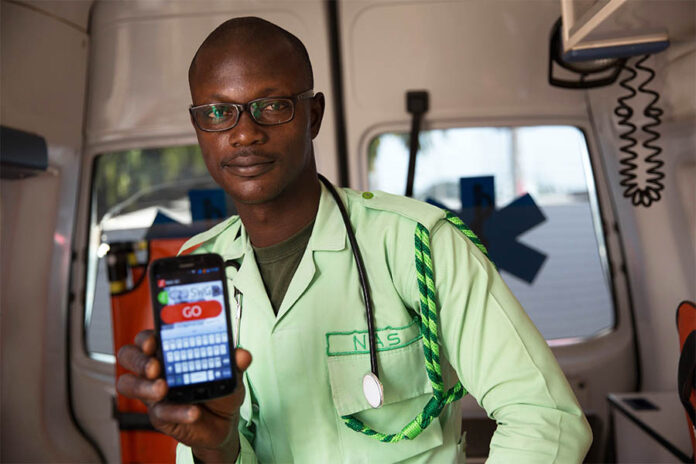 A mobile app developed in Ghana can slash the response time of ambulances by providing accurate location details without the internet. If you live in an area with few or unofficial street signs and addresses as billions do in developing countries this could mean the difference between life and death in an emergency.
The custom-made addressing system called SnooCODE RED was built by Ghanaian engineer Sesinam Dagadu, owner of tinyDAVID. It cuts response times by as much as 56%, which is especially important when responding to severely ill Covid-19 patients. The app can also be used to ensure that people in informal areas receive vaccinations.
Finding one’s way around in parts of Ghana and the cities, towns, and villages of other developing countries is challenging. Many streets aren’t named, houses aren’t numbered, and local residents use landmarks like trees, churches, or banks, to direct people. “That becomes a problem when an ambulance has been directed to ‘the blue kiosk at the corner’, but the kiosk has been moved,” says Dagadu. “The ambulance will then have to make follow up calls to find their patient, wasting valuable time.”
The software divides regions by simple codes using numbers and letters to make it easy for anybody to communicate their location and have others just as easily navigate to them. It generates a memorable six-digit alphanumeric location code using GPS to pinpoint an exact location, to an accuracy of 25 cm (10 inches) for specialist applications. The six-digit code remains the same for each specific location, meaning those with basic literacy levels and those without access to smartphones can easily memorise it for an emergency. Ambulance drivers and other users can enter the code into the app and it will calculate the best route to reach that address.
The app is being expanded to allow emergency responders to see a list of not just the closest health centres, but also the best-equipped hospitals to handle each emergency, at the touch of a button. This is being done with funding from the Embassy of Switzerland in Ghana and in partnership with the Emergency Medicine Society of Ghana.
The app is available in English, French and Portuguese and plans are underway to translate it to Arabic. The system has been optimised so that it can be used anywhere in Africa, South America, the Middle East and 70% of Asia. Because the software is not reliant on national infrastructure, and is simple enough for a pre-schooler to use, it has wide application during crises, natural disasters and disease outbreaks. Dagadu hopes that the innovation will help ambulance services meet the WHO’s standard of an eight-minute reaction time to emergencies.