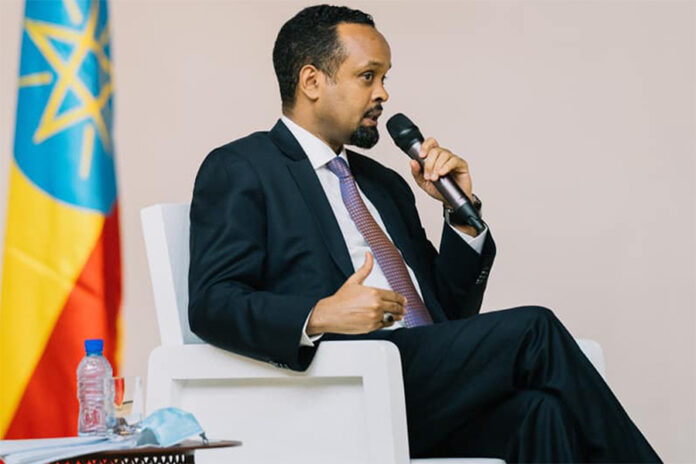 Under the midterm strategy the government targets to back the debt risk to moderate level in the coming three budget years time.

In his budget speech at parliament, Ahmed Shide, Minister of Finance, said that the debt restructuring work is undertaken to improve the distress to moderate level.

The country has been in high debt risk as of about five years ago in related with taking massive commercial loans for public projects that contributes to suffer the economy for their delays.

Ahmed said that as per the plan at the end of the 2023/24 budget year the debt stress shall shrink to moderate level from the current high debt risk.

The external debt-GDP ratio is about 27.3 percent, while as of March 31, 2021 the total outstanding debt including domestic one was 50 percent of the GDP or USD 53 billion.

It is to be recalled that the government suspended any public enterprises to access non concessional loans for about four years.

Under mitigation approach, Ahmed said that it will continue until the country is enabled to show massive changes on the export earnings and create a capacity to repay for debts.

He said that the government is using different policy instruments to solve structural problems on the export sector to improve the foreign currency earnings by increasing the volume and diversification in different sectors.

Debt payment restructuring with partners like China has also stated as other alternative to normalize the country debt stress.

The coming year projected tax collection has a 22.9 percent increment compared with the 2020/21 targeted revenue. In the 2020/21 budget year the government has set to earn 271.7 billion birr from tax that is expected to be achieved.

In the coming budget year the government has targeted to impose different restructures on the tax regime. For instance the value added tax (vat) reform: which delayed because of the global pandemic will be applied in the year. In this regard some commodities and services will be included on the vat regime. Similarly customs tariff revision will be put emplace to improve the revenue collection.

However the tax collection is expected to show a 23 percent increment compared with the preceding year its GDP share will be dropped to 7.1 percent.

According to Ahmed the budget deficit will be covered by domestic loan, 69 billion birr and foreign loan of 57 billion birr.

Of the total budget, which has an 18 percent increment compared with the 2020/21 budget, the budget support for regions took the lion share by 204 billion birr that was followed by capital and recurrent budgets of 183.5 billion birr and 162.2 billion birr respectively.

“From the total 183.5 billion birr capital budget 132.8 billion birr is covered by the government coffer of which 1.2 billion birr is allocated for rehabilitation work in Tigray region that will also supported by additional finance from partners,” Ahmed explained.

As usual the road sector takes the lion portion of the central government budget that is 67.45 billion birr or 19.5 percent from the capital and recurrent budgets.

Education and debt service followed by 19.1 and 13 percentages respectively or by 66 billion birr and 45.1 billion birr.

The defense budget has become a 4th priority with the share of 6.36 percent or 22 billion birr. For the 2020/21 budget year the defense sector has been the sixth priorities after water and health sectors with 5.62 percent share of the total budget. For this coming year it has slight increment in portion of 22 billion birr that was 16.5 billion birr for the ending year, and share from the total.

For the 2021/22 budget year the health and agriculture seat as 5th and 6th major sectors that will get the highest budget.