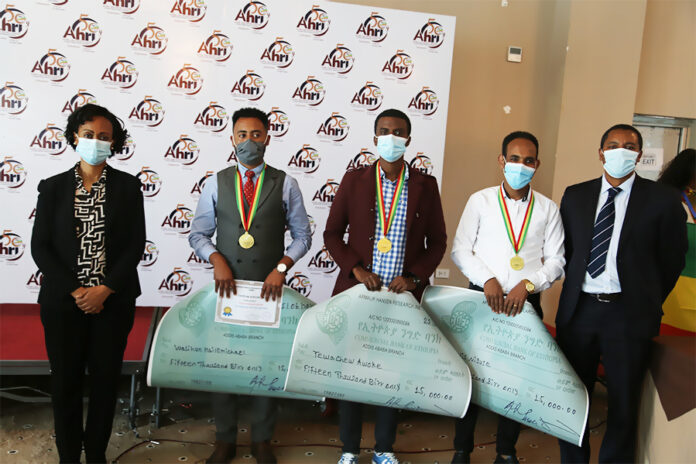 The much-anticipated 19th Tore Godal prize awards which had faced a year’s delay due to the global pandemic was finally held on July 1, 2021 at Magnolia Hotel in Addis Ababa, in the presence of Dr. Lia Tadesse Minister of Health, Dr. Dereje Duguma State Minister of Health, Prof. Afework Kassu State Minister of Science and Higher Education, AHRI Directors and other dignitaries.
The Tore Godal Award which is given in the name of the world-renowned Norwegian researcher and global health leader Dr. Tore Godal, each year recognizes outstanding young researchers for their stellar work in research.
The award saw 69 research entries up from 36 entries the preceding year, making the 19th awards the most competitive to date. The awardees of the day were Shimelis Nigusu, Tewachew Awoke and Wasihun Hailemichael, who received a medal, certificate and 15,000 birr for their remarkable research.
During the event, two books were officially inaugurated depicting the Armauer Hansen Research Institute’s (AHRI) 50-year journey and the journey and contribution of the African science giant Abraham Aseffa. The first book, written by Mesele Terecha titled ‘The Armauer Hansen Research Institute: A Biomedical and Clinical Research Institute in Ethiopia, 1969-2019’ provides a historical outlook of AHRI and documents the scientific and administrative history of the institute.
The second book, titled, ‘CELEBRATING AN AFRICAN SCIENCE GIANT: ABRAHAM ASEFFA’ is a book that pays tribute to the tenure of Abraham Aseffa who served AHRI for close to 20 years. Abraham Aseffa is well acknowledged as an icon by the institute as he has steered the institute through tough times of great change from the early days of operating as an NGO, as part of ALERT center and its current status as a government health agency. His list of achievements and testimonials from colleagues, friends, and AHRI alums are also depicted in the book.