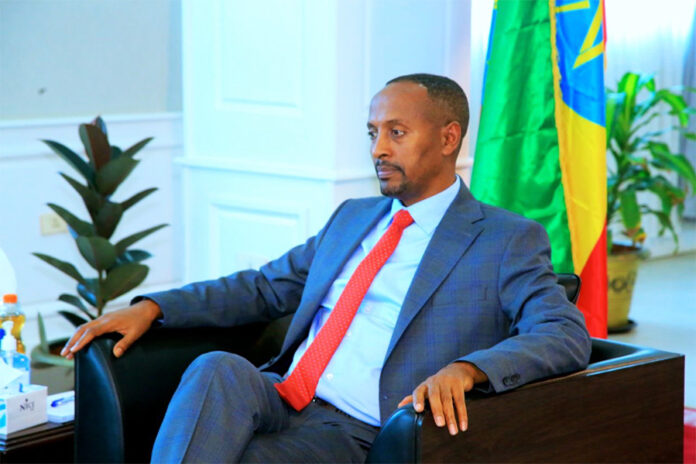 Ministry of Trade and Industry has asked the National Bank of Ethiopia to provide foreign currency to crude palm oil importers as priority. There are two industries importing crude palm oil in the country and according to Melaku Alebel, Minister of Trade and Industry, there is a plan to increase the number to five.
“Currently, 232 oil industries in the country are using 37 percent of input material crude palm oil, however there is huge shortage of input of materials which exacerbates the shortage of oil in the market,” said Melaku, adding, “As a short term plan to stabilize the market, the ministry has planned to increase importing palm crude edible oil.”
As Melaku said, government subsidizes crude palm oil imports as palm oil to make it more affordable to the majority of the population.
“We focused on the crude because it is less costly from the processed one,” said the minister adding that, “Producing crude edible oil here is our big vision which will create more jobs for many people in addition to stabilizing the market for edible oil which is currently dependent on imports.”
According to the ministry of trade there are 232 oil industries in the country, 26 big industries and 206 medium and small industries. Together the industries have capacity to produce 1.25 billion liters of oil annually where the national consumption is 906 million metric ton annually, however as a result of shortage of input most of the industries are working under their capacity can’t meet the demand. Meanwhile only 40 percent of the total demand is currently covered by local edible product.
The minister speaking this week at a forum that focused on the country’s edible oil related issues explained that the total number of active edible factories in Ethiopia has doubled in the past few years.
“Since some are under construction, when all of these edible oil factories become operational in a few years, the country is likely to substitute cooking oil imports more and more with local production and in the long-term, it should drive increased production of oilseeds locally,” insisted the minister.
Also local production of oilseeds cannot meet raw materials demand for the local food processing industry, and this is stated as one of the challenges in the local production of edible oils. The Ministry of Trade and Industry and the Ministry of Agriculture have also promised to give land within one month to oil producers to cultivate oilseeds in collaboration with regional governments. The ministries plan to do so before the rainy season ends.
“The government is assisting farmers in planting large pulse and oilseed plants on suitable land to reduce edible oil imports,” said Umer Husen, Minister of Agriculture, adding that, “The country has huge capacity on producing oilseeds, there are huge industries but still there is huge oil shortage problem in the country, thus it requires an integrated work of all stakeholders.”
Oilseed production covers only 2.7 percent of the total production which is 6.61 percent of cultivated land from the total cultivated lands. Similarly, both new and old factories are facing challenges with input material. Local production of edible oils in fiscal year 2020/21 (July to June) is forecasted at 63,000 MT. Niger seed, cottonseed, soybeans, and sunflower seeds are used mainly to locally produce cooking oils.
Total edible oil consumption in fiscal year 2020/21 (July to June) is projected at 630,000 MT, of which 90 percent is imported. Most of the oil consumed is palm oil. To this end, the country is encouraging investment in the edible oil manufacturing sector to expand productions and substitute imports with local production.