Empowerment is often a term thrown in business to mean to give power and authority to someone to do something. It’s noted as the process of becoming stronger and more confident with regards to controlling one’s life.
It is this journey of empowerment, more so to the black people that Dr. Fisseha Eshetu Habtemariam is gearing to strengthen to excellence. Dr. Fisseha is no stranger to striving for excellence; he is a passionate educator and social entrepreneur who founded, the first and largest prestigious accredited private university, Unity University, where he served as president. After leaving his duty at the university, Fisseha went abroad to the US where has served in the medical field and research.
Three weeks ago, Fisseha came back to Ethiopia with a vision of establishing a new company called Purpose Black, which is a global virtual marketplace. Capital sat down with Dr. Fisseha for an inside view of his new vision. Excerpts;

Capital: What does purpose black do mainly?
Dr. Fisseha: Purpose Black is a new initiative launched in May 2020 through collaborative efforts of more than 135 individuals. As the name indicates, the goal of Purpose Black is to offer economic solutions to some of the major problems of Black people all over the world.
There are three main reasons for the establishment of the initiative the first one is, all about finding our /black people’s/ own solution by our own selves on our problems; building our confidence and independent, is the second reason; the third and the main reason for us is related with black mentality and psychology which is accepting poverty, we have to fight this, blacks are not poor we have enough resource the thing is we didn’t use it properly. We want to solve this economic problem by changing the mentality as whenever there are economic changes a dozens of problems will also be solved and global acceptance and respect will rise. For example, if we see China, there was nothing in the world before some 70 or more years but if we see now it’s one of the biggest dominant countries in the world, the only thing China has changed is its economy. 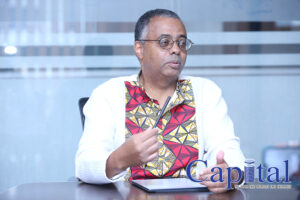 So we are trying to copy this in order to realize an economically developed, influential and respected black community in the world. We believe that working on digital economy will create a fruitful and thriving economy and thus the first model for the implementation of the global initiative of purpose black is purpose black Ethiopia. We strongly believe this is a great opportunity to position Ethiopia and Africa, at the center of a huge global initiative and benefit millions of Africans in the process.
The initiative will reduce youth unemployment, promote diaspora investment, sell product at fair prices and stabilize the consumer market. Moreover, it will promote export and increasing foreign currency earning whilst facilitating agricultural technology transfer.

Capital: Why did you choose Ethiopia?
Dr. Fisseha: When we set our goals, we had tabled 4 goals. The first thing is implementing projects that can impact 1 billion black people in the coming 15 years, and the second was creating 1 million millionaires at various centers in the coming ten years. The third on our goal list was establishing a Black Wealth Fund which will raise at least 1.5 trillion dollars in 15 years. The last but not least goal was to establish our own black narrative media organization.
So to accomplish these big goals we designed a model called the black collective perpetual wealth generation, which has different phases of implementation.
The first phase will be raising capital while phase two will be mobilizing the population. Phase three will deal with working on our huge projects.
For the first phase, all of the people who we have shared our ideas with, including a lot of Ethiopians, have given us startup seed capital. So for the past one year we have been doing so many things, including researching. So essentially what we have understood is that if we want to result in good outcomes and economic changes, we have to focus on the digital economy.
The main concept of digital economy focuses on the marketplace; it operates using technology by removing middlemen from the market and connects both consumers and retailers in the process.
So if we are planning to empower and improve huge numbers of black lives, we have to come to Africa where we can find more that 1.3 billion black people.
So when we come to Africa we know that there are a lot of options than Ethiopia, specially there are countries which have better experience in the digital economy for example Rwanda but we didn’t want to miss this historical opportunity. 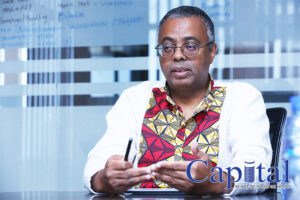 Capital: There are lots of challenges in Ethiopia including the development of the digital economy, security situation and so on, how are you going to face these challenges?
Dr. Fisseha: It’s not only us getting delving in the Ethiopian digital economy; it’s just a matter of time because there will be lots of digital platforms that will set up shop in the country. Also we know that there will be challenges, and to this end we have identified 11 of them. For example, security, financial transit, bureaucracy, infrastructure, culture and so on but we believe that we can overcome them overturn then with better outcomes.
Our system is not fully dependent on technology or e-commerce; we are trying to bring an end to end concept. The technology in the middle is a system to make it successful.
The model also includes farmers, that is, by helping black farmers to produce globally competitive and fair products. This is because huge numbers of the Ethiopian population as well the African continent are farmers living in rural areas. Here when we impact the farmer we have to educate the people by showing them how to use technology. We also want to provide seeds and also receive their product. Along this chain the next step is value adding on the product, agro processing, and then bringing it to the market.
We are trying to bring both the retail and hybrid ecommerce, so the distribution will be through the ecommerce and retail channels. To realize this we will build five hyper markets in Addis Ababa, ten supermarkets and 1000 retail stores which will be all over the country. For those who can get access to the internet can use the ecommerce whereas the other culture society can use the retail channels.

Capital: How are you going to solve the problem related to the foreign currency shortage?
Dr. Fisseha: We have set targets when we established purpose black Ethiopia. The first is mobilizing capital and to this regard we are planning to raise about ten billion birr in capital through following three ways. The first is by selling share locally, the second is by mobilizing the diaspora, and the third is through purpose black Africa which we are planning to collect ten billion dollar to distribute all over the continent of which Ethiopia will benefit through the same.
So currently we have started a movement called ‘Zoro Zoro le Hager’ the goal is to help the problem related with the foreign currency by raising 250 million dollar in the coming three months.

Capital: Are you working with the government?
Dr. Fisseha: Yes, we are working with government as it is one of our priorities and part of the process. We have made certain partnership agreements with different government offices including Ethiopian airlines, Ethio telecom, Job Creation Commission, and Ministry of Women, Children and Youth, Commercial Bank of Ethiopia and so on.
Furthermore we are calling on Prime Minister Abiy Ahmed, to be a patron of propose black Africa.

Capital: On what stage is the project now?
Dr. Fisseha: In the international network, the global purpose black platform is in operations. We are integrating and customizing the platform to Ethiopian context. We are trying to complete all the legal woks, we have set our office and we plan to complete the license, on July 24, 2021. There will be a ceremony to raise capital and start selling share soon as well.
Beyond this, we are working with the Ethiopian Youth Federation to train the youth on a program called ‘Manage to own and empower’ and through 1000 centers which we are planning to establish in the process, they will have the centers as owners and this will be part of creating 1 million black millionaires.

Capital: How are you going to sell shares, is it only on tele birr?
Dr. Fisseha: Locally, the share will be sold at the 17 banks; telebirr is one of the options alongside CBE birr and other digital wallets.
Those who are abroad can get the share through a credit card from Abyssinia bank and commercial bank of Ethiopia. Similarly, depositing in swift accounts or money transfer platforms using the commercial bank are ways of purchasing the shares. For those who do not have bank access, they can get the share in Ethiopian embassies.
We have prepared 10 billion shares which each is worth 100 birr and the minimum share one can buy is 10 shares worth 1000 birr. Also they are required to pay only 25 percent of the payment which is 250 birr and the rest can be paid in 2 years’ time interval. This of course is made in a way that makes the system accessible for all.
This is not just business for us. It’s one of the moves which can be a game changer in changing the lives of blacks. This will give black people pride and respect in the world, by creating public institution and public wealth for all.

Capital: You have been abroad for a long time, and it’s been almost three weeks since you have come back. What’s your view on the changes in the country? Did you visit Unity University?
Dr. Fisseha: Everything has theoretically changed. I have observed lots of new buildings, lots of road projects and so on and am really happy to see this. With regards to Unity College, I have not visited the campus as of yet, but it’s lovely to see it has sustained gracefully throughout the years.

Capital: What is the plan in the near future?
Dr. Fisseha: Propose black Ethiopia is our model. Of course the long-term plan is propose black Africa which is our biggest goal. Thus in future, propose black Africa will implement the same model used in Ethiopia to impact Africans through their respective countries to aid millions of people to get jobs. Millions of people will be impacted thus giving rise to a self-sufficient Africa.