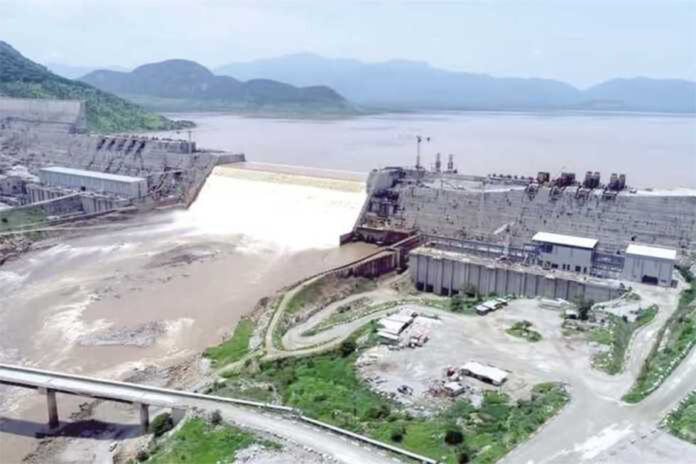 The construction of Grand Ethiopian Renaissance Dam (GERD) along the Blue Nile River has been undergoing for over nine years. The ground breaking ceremony and commencement of construction was held on April 2, 2012 with initial plans to complete the project within five years. Due to a number of technical challenges and mismanagement by the then TPLF/EPRDF government, the project registered insurmountable cost and time overruns.
The project is a huge and complex undertaking and the first of its kind ever attempted by Ethiopia along the Nile basin. Not only is the size and technical complexity that makes the project unique but also the source of finance. The entire project cost of some USD 5+ billion is covered by Ethiopia with no loans from any external sources. This is too overwhelming a cost to a poor country like Ethiopia where there is no fossil fuel or any other dependable income. The main domestic sources are the government from its meagre coffers and contribution by Ethiopians.
The project is a hydroelectric dam able to store about 74 billion cubic meters of water. The stored water is continually released from the reservoir to turn the turbines which in turn underpin the generating sets. The initial plan was to generate 5,250 megawatts (MW) of electricity. Subsequent design modifications elevated the generation capacity to over 6,000 MW.
The economic, financial, social and environmental benefits accruing from this project is a game changer in Ethiopia’s overall development ambitions. Suffering from recurring drought and dehumanizing poverty, Ethiopia was and still is dependent on handouts from the developed world. There is a general consensus among the public and the government that the sad state of affairs shall drastically and reliably change sooner than later. Doing so requires meticulous planning followed by organizing the available resources in the best optimum way through a responsible leadership.
In the past three years, under the leadership of Prime Minister Abiy Ahmed, a number of large projects that were strangled from leadership incompetence and rampant corruption are rescued. Just to cite few examples, seven out of the ten sugar projects that were delayed for over eight years are completed. Koysha hydropower project with the capacity of 2,000MW along the Omo River gained traction from the abyss. Irrigation projects scattered along the country are also in good shape after a long slumber. Of all those projects, what towers most is rescuing GERD.
The project’s leading cause of problems from among others was the incorporation of a local company, the defunct Metals and Engineering Corporation (MetEC), as subcontractor for the electromechnical components. Having no practical previous experience, the company was a disaster pill to the project and a hindrance to the main (European) Contractor. The very reason of inviting the company as a subcontractor was perhaps a sinister design by former officials to siphon money from the project under the guise of ‘capacity building’. After thorough technical assessments, a decision was made by the government to detach the project from MetEC and dismantle any midcore installations installed by the latter. Everything started afresh and the progress is now remarkably well above 82% percent. In the rainy season of 2020, GERD was able to store some 4.9 billion cubic meters. In July/August of 2021, another 13.5 billion cubic meters is scheduled to be stored, increasing the storage to 25% of the total storage capacity. This is enough to turn two turbines whose combined electricity output is about 750MW.
Ethiopia, a country of some 115 million, more than 60% of the population is off grid. The main source of energy available to the rural people is biomass from trees and agricultural byproducts causing colossal air pollution and environmental degradation. Recent studies in Ethiopia have indicated that smoke from firewood and cow dung as a source of energy is one critical adverse factor of health affecting the eyes and respiratory systems. Replacing the hitherto source of energy from biomass to environmentally clean electric energy from the GERD improves the economic, social and environmental conditions.
The availability of electricity across rural areas greatly helps in expanding education and health infrastructure to the needy. Peasants and their children working on their agriculture fields can attend schools in the evenings. Mothers can give birth in hospitals and clinics where electrically run medical equipment including refrigerators for medicine are available. The electric power is a linchpin in attracting various investments particularly in the fields of manufacturing, services, mining, agriculture and many others. The power is instrumental for availing water and sanitation facilities to the wider public through pumping surface and subsurface water sources. Irrigation agriculture can increase in multiple folds enabling supply of food for the hungry. Excess energy can be exported to neighabouring countries who are suffering from similar electric power deficit. The annual estimated revenue of electric power export is estimated at around USD one billion. The hard currency serves as a catalyst in significantly enhancing the socio-economic conditions of the nation.
Despite of the many internal and external challenges, Ethiopians are rallying with the government for the successful completion of the project. The internal challenges were successfully handled by holding former corrupt officials accountable and trouncing TPLF and its affiliates in the battle field. Thanks to the commitment of the government and the support of Ethiopians, the finance keeps flowing. The internal hurdle is therefore substantially resolved in a decisive way. The external challenges (a subject of another article) are still existential but will soon ebb away. If Mother Nature allows enough water to shower in the in this rainy season, the dam is ready to impound the planned volume of water making possible the initial phase (750MW) of electricity generation to join the national grid as recently as September 2021. That will deservedly be a joyful moment for all Ethiopians in the new Ethiopian New Year.