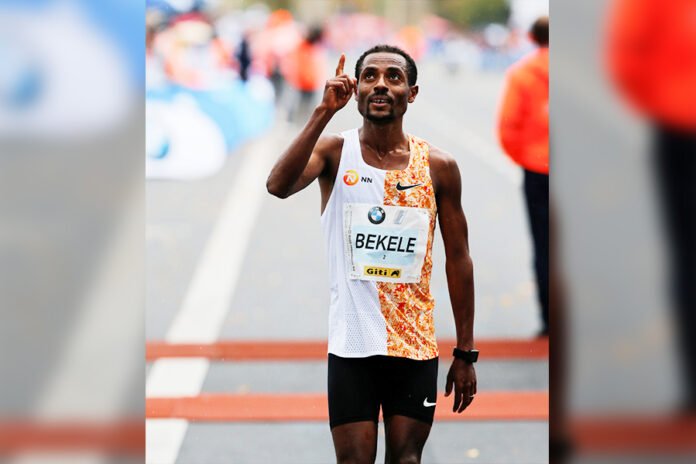 Kenesia Bekele will not be racing at the Tokyo Olympics, it has been confirmed. The second-fastest marathon runner in history, who finished the 2019 Berlin Marathon in 2:01:41, missing Eliud Kipchoge’s record by two seconds, did not take part in the Ethiopian Marathon Trials in May.
After the trials, the Ethiopian Olympic Committee, which has been at odds with the Ethiopian Athletics Federation (EAF) in recent years, assured fans Bekele would still be in the team.
However, in a joint statement from the Ethiopian Olympic Committee and the EAF on Thursday, it was confirmed that Bekele was not on the team. Instead, the four men’s marathon runners are the top finishers from the trials race: Shura Kitata, Lelisa Desisa, Sisay Lemma and Chalu Deso (as the alternate).
Bekele complained about the EAF’s selection criteria before back in 2016, he was left off the Olympic marathon team despite saying he was healthy and ‘ready for the challenge’. He told Reuters at the time how he was ‘deeply disappointed’ not to be going to Rio and claimed that some of those in charge of selection didn’t know the sport well enough.
‘The federation set criteria they knew very well would rule me out. I finished third in the London Marathon, when I was far from 100 percent fit. I’d done my preparation in full. Everyone knows that London is the toughest marathon except the people from the federation. There are groups there that know nothing about athletics.’
Bekele has not completed another full marathon since his Berlin Marathon win in 2019. He was due to compete in the 2020 London Marathon but pulled out, citing a calf injury.
As he will be 42 by the time of the next Olympics, in 2024, failing to be selected for Tokyo will mean Bekele’s ultimate sporting ambition to become the first person to win gold on the track and marathon in the professional era will slip further out of reach.