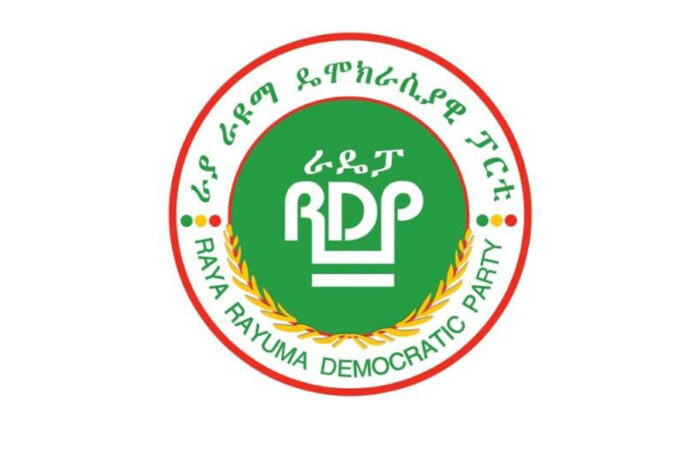 Raya Rayuma party, one of the national based parties in the country, which has submitted a petition, insists that the government should approve the establishment of ‘Raya Rayuma Region’ and is expecting good response from the government.
The party said Raya Rayuma is the land of Rayans. It doesn’t belong to Tigrians and Amharas either. Fanatic nationalists from both sides want to oppress the people and snatch the land, the party claim.
“The party was established by the committee formed by the people of the Raya to fight for the independence of Raya,” said Eyasu Berhe, one of the members of the central committee of the party. As he said, the committee has submitted its petition to the House of Federation and is expecting to hold a referendum.
Raya Rayuma Party asked the government to accept the petition submitted to the house of federation to become a state. The party argues making Raya an independent region that could play a big role.
The party also accuses the TPLF and the Amhara Special Forces, “The atrocities at Raya these days are immense,” said Eyasu adding, “former, dictator leaders made Raya stateless and an unidentified ethnic group.”
As he explains, during the war, atrocities were committed on the Raya people had been and are suppressed by the Amhara special forces and after the unilateral ceasefire declared around two weeks ago, the territory has been classified in to two in which towns of both sides are controlled by the TPLF and the Amhara special force.
“It is high time that the Government should protect the people, following the recent withdrawal of our Defense Forces from Raya Azebo, the TPLF is causing serious humanitarian and economic hardship to our people. To describe some of the crimes committed,” Eyasu points out.
On the other hand, the Amhara Regional State Security Forces, which entered Raya Woredas under the command of the TPLF, have been patrolling Alamata town’s shops, malls and boutiques from 23/10/2013 E.C to date. If this illegal activity continues, the issue of the rule of law will be set aside and there will be more serious human rights violations among the people of Raya and the concern will not be ignored.
“We urge the federal government to save our people from destruction, given that the people of Raya are being attacked in a way that is worse than ever. In this regard, we would like to express our sincere appreciation to Radepa and its members for their support to the government and our defense forces. To return to the town of Mahoni and Raya Azebo Woreda, where our Defense Forces left, to trust the government and fulfill its responsibility to protect the people who are on the side of the defense has led us to a dilemma,” said the committee member.
It is clear that the Federal forces should enter Raya Chercher Woreda and Alamata town to stabilize the situation. In addition, the government should arm the Raya to protect the area in order to protect the terrorists and militia.
While reacting to queries raised by parliamentarians, Prime Minister Abiy Ahmed on Monday July 5 explained about the backdrop of the law enforcement measured took place in Tigray region.
The Premier said that the terrorist TPLF mobilized the people of Tigray for war despite the numerous livelihood challenges of the people and attacked the Northern Command of the National Defense Force and these threats pulled the Federal Government into a conflict.
“The federal government have had no aspirations to engage in conflict yet TPLF posed a threat on four fronts,” Abiy told parliament.
“TPLF mobilized irregular forces siphoning national institutions and resources and mobilizing paid elements across the country given the mission to destabilize and multiply instability. Sacrifices being made in the Tigray region to restore services and repair basic infrastructure have cost us the lives of personnel in the line of duty as the criminal clique attacked these individuals,” adds the PM.
The Premier underlined that gains have been made in addressing the TPLF threat as the federal government has taken back weaponry seized illegally from the Northern Command, decreased the effects of the attempts to divide the Ethiopian society and apprehended key leadership of the criminal clique.
“In my view, those interested in seeing the conclusion of the conflict in the Tigray region are very few. It seems there are interests that seek to see the weakening of the Ethiopian state through a protracted conflict” he added.
“As a sovereign nation, we have tolerated a lot. Without government recognition armed forces were being organized, conflict entrepreneurs and propagandists were deployed throughout the country. The people of Tigray were told that they were at risk of war. Elders, investors, politicians, locals and investors were sent to mediate. Ultimately, the Northern Command was attacked. We were forced to set out to defend the country and return looted national resources and weapons.”
In a related development the Emergency Fact Check announced that the terrorist TPLF is perpetrating continuous attacks against civilians in several towns of Tigray.
“The terrorist group is killing civilians whom it profiled as supporters of the interim administration of Tigray federal government,” the national Emergency Fact Check platform states.
“Continuous atrocities by the terrorist group are aid operations posing risk of serious humanitarian crisis in the region,” emergency fact check says.